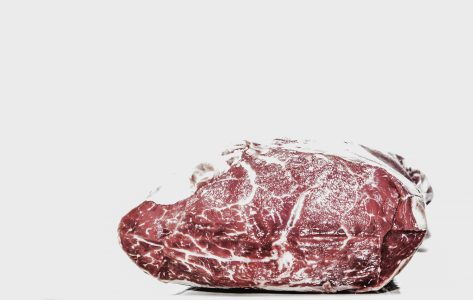 Is it possible to process meat that is technically kosher meat if schechted properly, but be prohibited for other reasons?

This question is discussed by Rabbi Aryeh Lebowitz regarding veal in a class, Is Veal Kosher. Veal is produced from a baby cow that has very tender meat. The reason the meat is so tender is not only because the meat is from a baby cow – it is fed a special powdered formula of meat and milk combined with hot water that is actually prohibited from the Torah. The baby cow solely eats this formula for sustenance until three days prior to schechita.

The Rambam writes in his Peresh HaMishnayis that since the Mishnah quotes the above halacha in the name of a da’as yachid, Rabbi Chanina ben Antignos, we do not posit that way. However, Tosfos writes on Temurah 31a that we do poskin like Rabbi Chanina ben Antignos, to forbid deriving benefit from an impure animal. Moreover, writes Tosfos, not only does this prohibition apply to a korban, it also applies to an animals kosher status if that animal derives primary sustenance from food which is asur b’hanau. Therefore, an animal which derives primary sustenance from food which is asur b’hanau, then the animal itself becomes forbidden to be eaten.

How do these positions manifest in halacha? The Shulchan Aruch poskins like the Rambam, and the Rema poskins like Tosfos. However, the Rema goes one step further than Tosfos and states that if an animal was primarily sustained by eating even prohibited foods, it too will be prohibited. (Tosfos wrote that the animal had to ingest foods which were asur B’hanau.) The Shach rejects the Rema. However, both the Shach and the Rema would agree that if the animal would primarily ingest foods that are asur b’hanau, the animal would be prohibited. For this reason, baby cows that were raised on a milk and meat formula would not be certified kosher by the OU unless the producers modified their feeding methods.

Rabbi Moshe Feinstein raises another halachic issue in producing veal – the caging of the cow to restrict movement to prevent the development of unwanted muscle tissue to maintain soft meat. Rav Moshe viewed this caging as infringing on the prohibition of tzar l’baaley chayim, causing unnecessary harm to animals since their legs were so weak, the cow could barely walk resulting in pain. Although tzar l’baaley chayim is generally overridden when there is a direct benefit to man, Rav Moshe did not see veal production as justifying such a benefit.

Click here for the Morasha shiur on Why Keep Kosher.