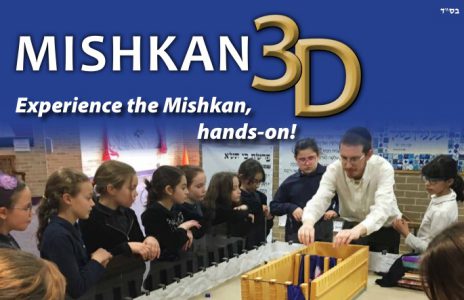 This week we begin the Parshios of the Mishkan, the portable, pre-fabricated Divine Sanctuary. This complex structure fascinated me even when I was very young, and ever since then I have attempted to portray it, duplicate it, and bring it to life. I remember my crude attempts with MS-paint, drawing the Choshen pixel by pixel. I must have been around 10. At 14, I made a Lego Keresh, the standing beams that formed the Mishkan’s walls. And the sockets and poles and rings for it, of course.

It wasn’t until I was much older that I discovered a way to produce precise replicas through 3D printing. This technology enables the creation of custom objects through a magical dance between computer software and hardware whereby a robot-like machine lays down melted plastic in just the right places, thin layer upon thin layer. I was hooked. Accompanied by tech guru Brian Silberberg, I showed some prototypes of the Mishkan to a local school, Bnos Yisroel of Baltimore, asking if they wanted to be part of this project. They did, and what a ride it was! It took a shana meuberes, a full 13 months.

From the get-go, it was important to me to make each part of the Mishkan at a consistent scale, whether it was the towering Mizbe’ach or a tiny spoon of Levona, frankincense. That really stretched the project in both directions, as I grappled with cramming a flower, goblet, and ball into a single tefach of the Menorah, on a scale that still allowed 10-amah Kerashim, some 60 times taller. I settled on using one inch for every amah. It was simple, straightforward, and it matched the scale of another Mishkan set on the market, which supplied me with the Yeriyos. That was important, because you can’t produce 3D printed fabric.

The goal was to get every detail in, to make models even more accurate than the 3D-rendered pictures in contemporary sefarim. And of course, making a physical, durable model is much trickier. I went through the sugiyos of each kli, taking nothing for granted.

3D design work is hard. It’s tedious and frustrating. It has its physical constraints, and you have to work within them. You can spend all day designing one part, but when the plastic hits the build plate, all you end up with is a mess resembling spaghetti. It’s a seemingly endless cycle of successive iterations, folders full of files with names like, “MenoraSolidFixingPerach8RebasedRaft2a.stl.” I routinely worked until 2AM, at times despairing on ever finding a way to make a certain part work, only to wake up in the morning with a fresh approach. Wow, rereading that, it sounds rather intense. It was. It was also well worth it.

After 13 months of exertion, the completed Mishkan was unveiled in Bnos Yisroel, just in time for Parshas Terumah. One at a time, each class had their chance to take the Kapores off the Aron and see the Luchos inside, to see the entire Mishkan taken apart and reassembled, and to experience the Mishkan as never before. The enthusiasm and engagement made it very clear that all the effort invested had paid off many times over.

Although the Mishkan is usually on display at Bnos Yisroel of Baltimore, it comes apart for easy transportation, just like the real Mishkan. If you want the Mishkan model to visit your school or camp, email me at Hallel Newman @ gmail . com (without the spaces).

You can see more pictures of the 3D Mishkan here and here.