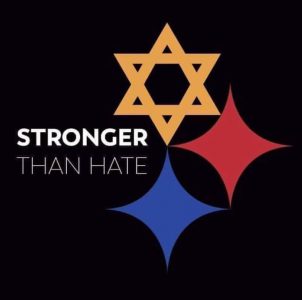 Jews around the world are shocked to hear about the horrific synagogue shooting that took place in Pittsburgh this Shabbat that claimed the innocent lives of eleven people. There are no words that can express the communal devastation felt throughout the entire city of Pittsburgh. In fact, ahead of their game on Sunday, the local NFL team — the Pittsburg Steelers — modified their logo to show their solidarity to the Jewish community (we have chosen to use this logo as our featured image for this piece) and will be having a moment of silence to honor those murdered.

The news is still both fresh and numbing. Many people have questions and are searching for religious responses to how does Judaism view guns to what are we to make of all the antisemitism in this world..?

After all, throughout world history, the Jewish people have endured severe ongoing hate, persecution, exile, violence and genocide. Although in recent decades American Jews have not experienced much anti-Semitism, anti-Semitic incidents in the U.S. increased more than one-third in 2016 reflected by assaults, vandalism, and harassment with a total of 1,266 acts against Jews and Jewish institutions. In the first quarter of 2017, this figure grew 86 percent. French and even British Jews are now seriously questioning their future in Europe due to the increase in anti-Semitic acts there.

The following are a collection of classes that you can use to teach your students as well as an anthology of thoughtful and insightful articles devoted to exploring religious responses that the layperson to the scholar can use to begin to cope with this heartbreaking news. We will update this page as more articles and words of chizuk become available. May the families be comforted amongst the mourners of Zion and Jerusalem.