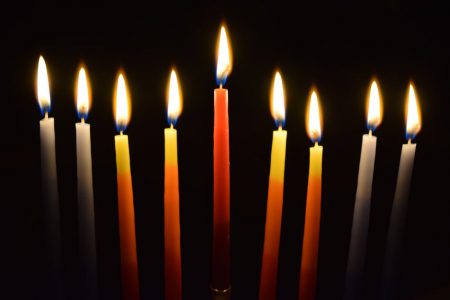 Some explain the name ‘Chanukah’ to refer to the Jews resting on the 25th day of Kislev, but others point out, one is permitted to work on Chanukah… it is not a holiday that requires ‘resting.’ “The days are for praising and thanking Hashem!”

Some say that it refers to the concept that it is better not to do work while the Menorah is burning.  Others say it refers to resting from going to battle. Others explain that we learn the primary purpose of the Jews was not to win the war to be victorious.  Their goal was to do what was necessary to enable them to focus on Torah and mitzvos properly.

The Rambam teaches this in the Laws of Repentance 9:2, “Why do all Jews desire the days of Moshiach? To be able to be at rest from governments that make it difficult for us to study more Torah and perform more mitzvos…”

Ben Yehoyada explains that is why it is not called ‘Nochuka.’  That would mean rest from battle.  It could mislead us to think that we should rest from work on Chanukah, as on Shabbos.

Rather, ‘Chanu-kah teaches us that the main purpose is to appreciate that Hashem chose to grant us His favor.  [Similar to “Noach finds favor in the eyes of Hashem,” Bereishis 6:8].

The Sages also wanted the ‘Cheis’ to be the first letter to highlight that the eight days are significant.

Now we can explain, “Why didn’t they call the holiday the ‘Miracle of Lights Holiday?’”

Rashi explains the Gemara’s question:  For which miracle did they establish the holiday?

There was an open miracle of a small amount of oil lasting for eight days, or the seemingly greater, but concealed, miracle of 13 people overcoming and winning against thousands and thousands of soldiers…?

The Ramban, Shemos 13:16 explains, “From open miracles a person learns to recognize the hidden ones…” A concealed miracle may be for the purpose of saving people. The open miracle, however, may not actually be necessary in a functional way, but it teaches us openly that Hashem is in control of everything.  He runs the world. He makes everything occur and He can change whatever He chooses to do!

Hashem could have left enough oil hidden to last for eight days.  Instead, He chose to bring about an open miracle in order to open up our eyes that every battle the Jews won was miraculous.

Actually, the Gemara, Taanis 25a, asks “Why does oil burn at all?  It is the same miracle as if vinegar would burn…it is Hashem’s doing.”