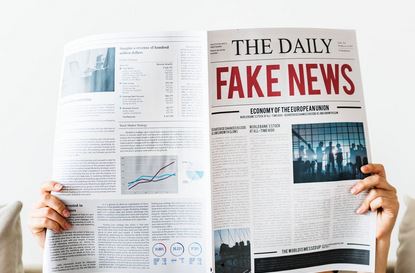 The daily news used to be considered sacrosanct, but nowadays people always question its veracity. And we’re not talking about The National Enquirer. We’re speaking about respected, primary sources of journalism. Moreover, fake news has become such an explosive issue, that the outcomes of national presidential elections are purportedly influenced by false reporting.

Professors Hunt Allcott and Matthew Gentzkow, from NYU and Stanford, respectively, published a landmark study showing how social media has transformed the nature of the oversight of news:

Social media platforms such as Facebook have a dramatically different structure than previous media technologies. Content can be relayed among users with no significant third party filtering, fact-checking, or editorial judgment. An individual user with no track record or reputation can in some cases reach as many readers as Fox News, CNN, or the New York Times.

Following the 2016 election, a specific concern has been the effect of false stories—“fake news,” as it has been dubbed—circulated on social media. Recent evidence shows that: 1) 62 percent of US adults get news on social media (Gottfried and Shearer 2016); 2) the most popular fake news stories were more widely shared on Facebook than the most popular mainstream news stories (Silverman 2016); 3) many people who see fake news stories report that they believe them (Silverman and Singer-Vine 2016); and 4) the most discussed fake news stories tended to favor Donald Trump over Hillary Clinton (Silverman 2016). Putting these facts together, a number of commentators have suggested that Donald Trump would not have been elected president were it not for the influence of fake news). Journal of Economic Perspectives—Volume 31, Number 2—Spring 2017—Pages 211–236.

Even the paper that was always assumed to be the bastion of credibility, The New York Times, was taken to task for recently publishing fake news by attributing a walloping $52,000 expense for a motorized drape system for Nikki Haley to the Trump administration, when in fact it was ordered by the Obama administration.

Maybe Judaism – the belief in one G-d Who revealed Himself to the entire Jewish nation at Mount Sinai and gave them the Torah – is not factually grounded? Perhaps it’s merely a cleverly crafted myth that has found some support over the ages by so-called Jews and non-Jews alike, but cannot be shown to be factually based. After all, there are hundreds of religions and spiritual movements out there. Not the least to note this has been Oprah Winfrey, who produced a seven-part television mini-series in 2015 entitled Belief exploring faith and spirituality.  Atlantic Magazine reported on October 18, 2015:

“The breathtaking aesthetics of ‘Belief’ are reason enough to watch. Oprah spent a heap of cash over three years to produce a series packed with stunning cinematography and effects and a soaring score. The package is reminiscent of BBC’s epic ‘Planet Earth,’ a similarity that Winfrey has admitted was intentional. Oprah’s celebrity status and the big-budget quality she was able to provide make for a powerful combination. But the billionaire media mogul is both ‘Belief’s’ greatest asset and its highest hurdle. She was widely admired during her talk show’s heyday, but things shifted among her religious fans when she began espousing an eclectic spirituality. She claimed that there are ‘millions of ways’ to get to G-d and endorsed New Age gurus like Deepak Chopra and Eckhart Tolle.”

So how can we know that Judaism is not, in fact, fake news?