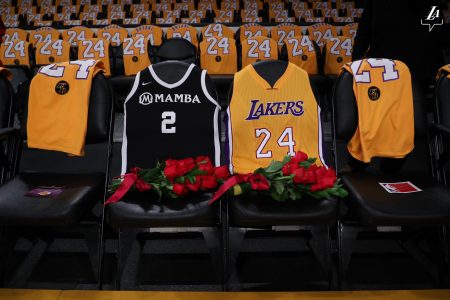 It has been a sad week for many of our students in the wake of the tragic helicopter crash that took the life of basketball legend Kobe Bryant. I knew there were students I had to check in on that day to make sure they were okay, and calls and texts have continued coming in all week as people are seeking support during this challenging time. For those who were teenagers between 2000-2015, Kobe was their hero during their high school and young adult years.

They have all kinds of questions and reflections. One student asked if there is Olam Haba for non-Jews. Another person told me, “I had a hard time in high school and wasn’t much of a student, plus my home life wasn’t very good, but I loved basketball and I loved watching Kobe. He just gave me hope and something to believe in that helped me believe that things could get better.”

Comments like these, and others, have me thinking about why so many people feel connected to a person they never even met, and why his loss has affected so many people around the world. It’s interesting that even fans of other teams don’t seem to hate him (as is the norm with rival sports teams), and other sporting events (not basketball) have been holding moments of silence at the beginning of their games.

In trying to understand the important role that sports, and its heroes, play in many people’s lives, I found a study that concluded:

“When our team wins a game, our overall sense of optimism goes up with regard to other real life events, like getting a job or succeeding in school. On the other hand, if our team loses, we tend to be more pessimistic about real life things. Studies of team loyalty show that it runs higher than almost any other non-family based identification. Unlike products we use and identify with, we tend to stick with our sports teams even when they lose or make mistakes. If products we use are not satisfactory, we tend to get rid of them quickly but with sports teams, we treat them like family. That is because we tend to subsume the identification into the ‘family’ or ‘relationships’ category rather than as a product.”

I think that for many, Kobe Bryant created a sense of hope. He represented the persona of a winner, and by admiring and following his life and career, people felt connected to someone successful who gave them hope for their own lives. The other thing that many of the students saw in him, was someone who kept pushing, and never gave up. Kobe had taken on the nickname The Black Mamba and thus espoused a philosophy called the “Mamba Mentality” which in his own words he described as:

Especially for students (and even adults) with many challenges in their lives, this perspective resounded loudly with them, and the notion that the person behind it is gone, has been difficult for them to process. One student told me he was going to apply the Mamba Mentality to his avodas Hashem and he called up his rabbi to set up a chavrusa.

Among the many calls I received, a few conversations went like this:

“I am so upset about the death of Kobe Bryant, but it’s really bothering me how connected I was to him, and how much his death is affecting me.”

They understand they are mourning a basketball player who they did not know, and aren’t really idolizing the values and his behaviors, so why are they feeling such a profound sense of loss? Some even articulated, “How come I feel so connected to his death, but when a Rosh Yeshiva passes away it doesn’t affect me as much?” The imbalanced response is very disturbing to them.

My initial reaction was to validate their feelings of loss. This person played some type of role in your life during your pivotal years of adolescence, and for that you can mourn. I also told them that it’s impressive that they are at a place now where they understand that something doesn’t feel right with the pain they are experiencing for a basketball star, and they recognize that maybe their priorities and sense of loyalty are slightly skewed. On the other hand, I want them to understand that sports and its heroes have been part of their culture for many years, and one doesn’t detach from that so easily. The feelings of loss are real and must be validated, but perspective is key.

Rabbi Gavriel Hershoff, MSW, is a Los Angeles, CA based rabbi and therapist at Aish Tamid of LA.