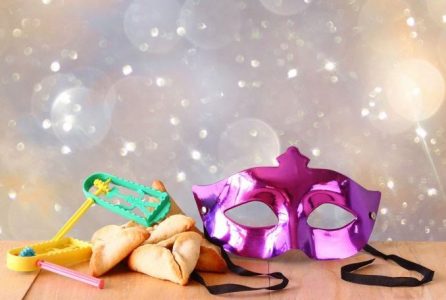 This chapter will uncover what is unique about Purim through a Piyut, a liturgical prayer-poem called Shoshanat Yaakov, that traditional Jews recite immediately upon the completion of the reading of the Book of Esther (called the Megillah) on the night of Purim and then again the following morning. The ideas contained in this poem will help convey the deeper meanings of the Megillah, as well as provide insight into the special customs of this holiday.

WHAT DID THE RESIDENTS OF SHUSHAN REALLY SEE AND HOW DID THEY SEE IT?

The verse in the Megillah tells us “Mordechai went out from the presence of the king in royal clothes of (techelet) blue and white, and with a great crown of gold, and with a garment of fine linen and purple; and the city of Shushan rejoiced and was glad.” Although the text describes the many fine clothes, materials and colors that Mordechai wore (white, gold, fine linen, and purple), the composer of the Piyut-prayer selects only the material of techelet-blue, and writes that only techelet-blue was seen by the people of Shushan, as the Piyut reads: “The rose of Jacob was cheerful and joyous when together it saw Mordechai robed in techelet-blue.” It is important to understand why the composer removed something from the verse (everything else that Mordechai wore) and then added something not found in the verse – that they saw it yachad-together. The questions, then, are: Why is it that when the Megillah describes the sight, it says that city’s residents see Mordechai with many clothes, called “levush malchut-royal garb,” but the composer selects only the techelet-blue clothing and then says that the residents saw Mordechai when they were “yachad-together.” The “yachad-together” could mean that everyone saw it at the same time, which would be very strange, since the entire large population of the city could not possibly see anything at the same moment. Or this phrase could mean that whatever they saw, they saw it in a unified manner. Then, the Jews of Shushan apparently saw the unity in the techelet-blue of Mordechai. What does it all mean and what is the composer trying to convey to us about Purim?

WHAT IS THE DEEPER MEANING OF SHOSHANAT YAAKOV?

Shoshanat Yaakov-The Rose of Jacob, the name and the first two words of the Piyut, is also a significant concept when discussing and analyzing Megillat Esther. The word Shoshana-rose is not merely a play on words for the city of Shushan, but it is also a metaphor for the entire Jewish people. For example, in King Solomon’s Song of Songs, the Jewish people are compared to “a (Shoshana) rose among thorns,” and the image appears in the Psalms as well: “To the Chief Musician, about the (Shoshanim) roses, A Psalm of David.” Just as the Shoshana-rose is caught between the thorns in everyday life, there is no better moment in Jewish history to call the people a Shoshana-rose than at this moment describing the Purim story. The Jews were truly caught between the thorns, as their lives and religion were threatened with destruction.

Even the use of the name Jacob is appropriate for the Purim story, rather than Jacob’s other name, Israel or Yisrael. Jacob is the name given to our forefather at birth, but it is not the name used in Scripture when it attempts to describe the Jewish people as a nation. That name is Yisrael, as the Jewish people are called in Scripture the Children of Israel, and not the Children of Jacob. But here, for some reason, it is the rose of Jacob that is referred to. It is a reference to the Jewish people, the children of Israel found in Shushan but called by their “first name,” Jacob. Why? We can already see the tension between the two names of this great man in Genesis, when he is called both names by G-d in the same verse! These are not the verses that describe the battle with the angel (when his name was actually changed), but later on, before Jacob-Israel descends to Egypt.

The brothers come back from Egypt and tell their elderly father that Yosef is still alive in Egypt. He does not believe them, but then sees the wagons that Yosef sent to bring him to Egypt, and Jacob is “revived.” He brings sacrifices to the G-d of his father Isaac, and then the following occurs: “And Israel took his journey with all that he had, and came to Beersheba, and offered sacrifices to the G-d of his father Isaac. And G-d spoke to Israel in the visions of the night, and said, Jacob, Jacob. And he said, Here I am.” This is the first time, after a long respite, that Jacob is called Yisrael in the Torah. After Jacob’s name was changed to Yisrael much earlier by the angel, after he believes Joseph, his son, has died, he returns to the name Jacob. His spirit is fallen and many years pass before reaching this moment of “Joseph is yet alive.” When he is revived and begins to live again (as it says, “And when he saw the wagons which Joseph had sent to carry him, the spirit of Jacob their father revived”), he returns to become Yisrael once again.