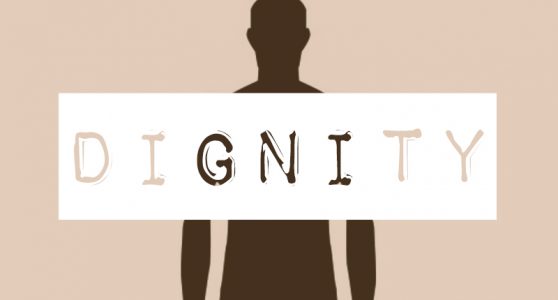 There is no controversy in Judaism regarding the concept of human dignity. It is universally recognized as an important idea, with the issues discussing only how important dignity is in the hierarchy of Jewish values and why it is so important. Indeed, it is vital to ascertain which Jewish values are less significant than human dignity and which are more important. The sources themselves reveal an attitude marked with great Jewish sensitivity toward the individual person.

There is a general consensus, even among secular people, that it is somehow improper to insult another human being, hurt his or her feelings or cause any psychological discomfort. Judaism similarly counts one of the 613 mitzvot-commandments as an imperative to treat every person as one would treat himself or herself, to speak only positively about another person and even to care about the monetary assets of another person as much as the person would about one’s own finances. This is based on the Mishna which instructs a person to treat another human being with the same respect as he or she treats himself. But when it comes to the reasons behind these generally held attitudes, it is there that secular society and Judaism part company. The Midrash says that each time you embarrass another human being, you are also “diminishing” G-d Himself, as if it were, since the human being is created by G-d in His image.

Based on this concept, we can understand a series of Jewish laws which are very different from those found in secular society, regarding the embarrassment of another person. For example, the second part of the verse, is perfectly understood and logical: “Do not put a stumbling block before a blind person.” One can readily comprehend that a stumbling block placed before a blind person (literally or figuratively) will cause that blind person harm when he or she trips upon it and falls. However, the first commandment in that same verse says, “You shall not curse a deaf person.” Here, it is difficult to understand what kind of harm can possibly come to a deaf person who is cursed. Since he or she will not hear the curse, and no one will know or get hurt by this curse, why is it prohibited? But, if the reason is viewed in the context of the Midrash referred to earlier, it can be readily understood. While the deaf person is not being harmed through the curse, the Creator of that deaf person, G-d and His image is certainly “belittled” through that curse.

By the same reasoning, Jewish law states that a person may not even curse himself or herself. On the surface one may question why this should be forbidden. One can easily understand why an individual may not make others feel bad, but why are you not allowed to harm yourself? But since you, too, are a creation of G-d, He is still “demeaned” if you curse yourself. Even if you do not personally mind, G-d, your Creator does mind. It is for that same reason that a person may not cause harm to his or her body. It really belongs to G-d, not to the individual, and even if the person does not mind, G-d, the owner does mind. This aspect of embarrassment will be explored more deeply later in the chapter.