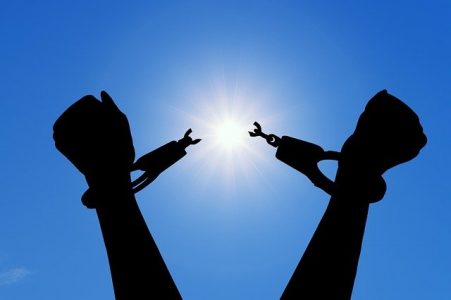 The backbone of democracy in the United States and many other countries is the freedom of the individual. In these places, man has the ability and the right to make his own choices in life. But what does this really mean? Can a person do anything he wishes? Certainly not. Clearly, man’s freedom is limited. He is not free to choose to break laws or yell “fire” in a crowded theater. What then is meant by choices and freedom? Judaism discussed this important concept long before the United States became a country founded on the principles of freedom. The Jewish definition of freedom differs considerably from the political definition.

FREEDOM IN A JEWISH SENSE IS BASIC TO HUMAN EXISTENCE

That which separates man from all other creatures in the universe is his ability to choose his own path in life. Unlike the animals (that can only do what is instinctive) and even the angels (that can only do good), only man has free choice. This is what is meant by the Torah phrase “man is made in G-d’s image” as explained by Seforno. Just as only G-d has freedom in the universe, so does G-d grant freedom only to man, i.e. in His image. The very first story in the Torah demonstrates man’s ability to choose. G-d commands man not to eat the fruit of the tree of knowledge but man defies Him and eats anyway. Of course, there are always consequences to the choices man makes, whether in the moral or amoral areas of life. But choice is granted as part of daily existence. Just as the Torah begins in the first story with a commandment, but, at the same time, it stresses man’s freedom to choose, at the very end of the Torah, after almost all of the 613 commandments are given, G-d reaffirms man’s right to choose his own path in life.

Maimonides spells out the specifics of how man’s choice operates in the moral sphere. No matter how badly a person acts and thinks, the ability to choose and, hence, reverse his behavior, always remains within him. In fact, in order to preserve man’s free choice, G-d must permit evil to exist in the world. If G-d were to prevent evil each time someone would do something improper (or even immediately punish the perpetrator for an immoral act), then there would no longer be free choice. Therefore, G-d prefers to tolerate evil rather then limit man’s freedom and his ability to choose freely.

The concept of totally free choice, did not really exist for the Jewish people until much later in its history. While the Jewish people in the desert had the choice whether to sin or not sin (and they often did sin), the choice wasn’t totally free as long as G-d performed open, supernatural miracles. There would always be people who saw the glory of G-d and this in itself would prevent their sin. Thus, their free choice was not free in the ultimate sense. This is symbolized, says the Meshech Chochma in interpreting the meaning of the famous Midrash where G-d held Mount Sinai over the people and said either you accept the Torah or this will be your burial place. He explains that this was psychological pressure on the people, because after witnessing the Ten Plagues and the Splitting of the Sea, it was difficult for them to oppose G-d, and thus their choice was not completely free. It was only later in Jewish history, after events which led to Purim, and G-d’s miracles were no longer so obvious (because they became natural, not supernatural – see chapter about “Miracles”) that the people truly had free choice. Thus, it was when the people reaffirmed accepting the Torah after the events leading up to Purim, the first natural miracle in Jewish history, that their acceptance was out of total freedom. We can now readily understand how important freedom and choice are in Judaism, and the extent to which G-d even changes the nature of the world so that man can have the unique quality of freedom.