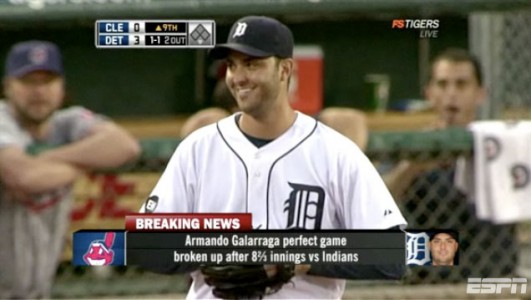 The Difference between Me and You
We all make mistakes, I know I do. In fact, I probably make more mistakes in a day than correct decisions!

However, too often, I expect others to be tolerant and forgiving and forgetting when it comes to my mistakes while I am too strict in not being as tolerant with regard to the mistakes of others.

This double standard is unfortunately too often the norm with regard to human relationships.

With regard to my faults and failures I expect you (at least after I have said, “I am sorry”) to forget the incident and to no longer hold a grudge.
However, when you have wronged me, for ‘some reason’ I allow the incident to be ‘saved’ in the ‘memory’ of my mind to be resurrected when needed and never to be forgotten.

Did you ever hear of baseball?

Armando Galarraga was a mediocre pitcher for the Detroit Tigers; he now plays baseball for a team called “Brother Elephants” which is part of Taiwan’s Chinese Professional Baseball League.

No batters from the opposing team–the Cleveland Indians–had reached base during the entire game. The 27th and what should have been the last batter hit a lazy ground ball to the infield.

The runner seemed to be ‘out’ so clearly that Armando Galarraga and his teammates and the television announcer who was calling the game, all began to celebrate. However, shockingly, the umpire, Jim Joyce, a veteran umpire with over 20 years of experience and who was well respected by the players as being a fair and evenhanded umpire, ‘blew’ the call and declared the runner ‘safe’!

The instant replay clearly revealed that indeed the umpire had missed the call and that the runner was really out, without any question.

The perfect game was gone.

In the entire history of Major League Baseball, only 23 Perfect Games have been pitched.

This was Armando Galarraga’s one chance for immortality and stardom. However, because of the clear mistake of the umpire, the accomplishment which he had rightly earned was taken away from him.

Perfection through Imperfection
The reaction in the media and among the fans was immediate and fierce. There were those who called for the umpire’s dismissal.

There were those who wanted the commissioner to reverse the call and right the wrong.

However, how did the two directly involved individuals react? How did Armando Galarraga react? “Galarraga was forgiving and understanding of the mistake. Without irony, he told reporters after the game, “Nobody’s perfect.” (Wikipedia).

Meaning, Armando Galarraga was understanding towards the umpire and forgiving.
What was the umpire’s reaction? “Joyce, a 22-year veteran, tearfully admitted after reviewing video of the play after the game that “I did not get the call correct,” insisting that he “took a perfect game away from that kid over there…” (Ibid) Armando Galarraga was sympathetic and forgiving.

Jim Joyce took responsibility for his mistake, apologized and offered no excuses: “I did not get the call correct,” he stated clearly and without reservation.

The Lesson of Imperfection
Nobody is perfect. We all make mistakes and we all ‘miss calls”.
Often, we see that when mistakes are made by us, we feel the need to do everything and anything to somehow, no matter how far-fetched, justify our actions, and we cannot say the magic words, “I am sorry”.

However, simultaneously, irrespective of our inability to apologize, we expect others to be benevolent and forgiving towards us despite our apparent lack of sincerity.

However, when others harm us, too often, no matter how apologetic they may be, we cannot bring ourselves to forgive and forget.