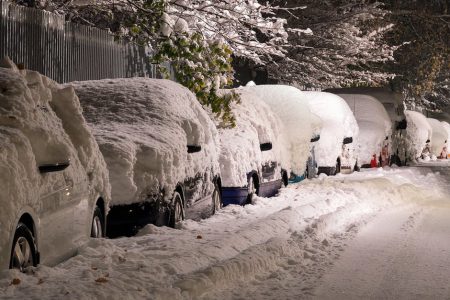 It’s been really cold these days, as I write these words the actual temperature is 7 degrees above zero with the “real-feel” at -18 degrees!

Last night at about 8 PM or so the temperature outside was more or less the same as now. I had a quandary; I wanted to attend a vort of a very good friend of mine which was being held at Beth Shalom which is located 1.4 miles away from my Shul. I had not yet had the time to clean off my car from the light snow which enveloped it on Shabbos and as I left my office onto High Street I was still unsure how I was going to arrive at the vort. I looked at my car and the snow which covered the windows appeared frozen solid. I contemplated attempting to scrape the snow off; however, the thought of struggling with this vigorous exercise was not very enticing.

I continued to walk towards the street, still unsure as to how I would arrive at my destination when suddenly a young man in his thirties said, “Can I give the Rav a lift home?” Thankfully in our neighborhood, offers of rides back and forth to Shul are not uncommon and I almost always politely refuse as my need to get some exercise during the day trumps the chessed “desires” of others. This time, since I was interested in traveling to the vort I replied honestly, “I actually do need a lift, however, not to my home, but, to a vort at Beth Shalom.” Without hesitating, the young man – who I soon discovered is a Rebbe at one of the local yeshivas – said, “No problem, I’ll drive you there.” I agreed and we entered the car and began to discuss Torah.

As we neared the Shul he asked if he should wait for me. I replied in the negative as I was sure I could schnore a ride home from one of the many people coming and going. He then said that he actually knows the baal simcha so he will come in as well and say Mazel Tov. He dropped me off, went to park and in a few minutes we met up again in the hall. We both wished the baal simcha a hearty Mazel Tov, he proceeded to bring the car to the door of the Shul and off we drove back to my Shul, the entire episode lasting no more than 15 minutes.

I could not have asked for more. I needed to go to the simcha, how I would get there was not yet known to me, however, the need was present. Thankfully, Hashem in His compassion sent me a true baal chessed who made the human decision to fulfill a true and complete chessed and allowed me to attend the simcha while taking minimal time away from my learning.

This was one example of when if you try to do what you’re supposed to do somehow it gets done.

Can I tell you this always works? Certainly not; however, I was appreciative to both Hashem and my “driver” that this time it worked better than I could have ever planned it.