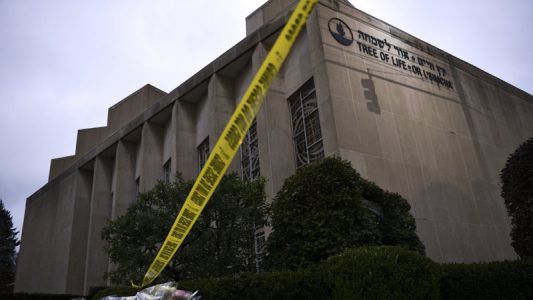 (The first line of President Roosevelt’s famous Infamy Speech delivered to a joint session of Congress on December 8, 1942, the day after Japan’s attack on the United States. The speech was broadcast live by radio and attracted the largest audience in US radio history, with over 81 percent of American homes tuning in to hear the President.)

Last week, Parshas Vayeira, the 18th of Marcheshvan 5779 and October 27, 2018, a day which will live in infamy – the Jewish community in the United States of America was suddenly and deliberately attacked by an evil anti-Semitic monster. In a rampage described as among the deadliest against the Jewish community in the United States, Robert D. Bowers, armed with an AR-15-style assault rifle and at least three handguns, and shouting anti-Semitic slurs, opened fire inside a Pittsburgh synagogue on Shabbos killing at least 11 congregants and wounding four police officers and two others.

Along with the eleven Kedoshim whose lives he stole and whose relative’s lives he shattered, he also burst wide-open our childlike bubble of naïveté which contained the unrealistic belief: “It could never happen here.” However, it did happen here.

As shuls throughout the world were in the midst of reading about Avrohom’s open and welcoming abode – a tent which had four different openings to accommodate everyone from every direction and from every background, race or creed – a murderous miscreation invaded the sanctity of a synagogue and butchered innocent people for the sole reason that they are the descendants of Avrohom Avinu.

No longer can we walk into our shuls with a sense of security and safety. No longer can we can we naively claim, “It could never happen here.” It did happen. It did occur.

As we attempt to digest the events of last week, there is one message that impacts all of us loudly and clearly. Robert D. Bowers cared not what denomination the Jews he killed belonged to, his sole intent was to kill Jews. So too, as we heard the news, not one Jew in the world cared what denomination the Tree of Life Synagogue associated with.

Not one Jew is the world asked if they were Orthodox, Ultra-Orthodox, Hareidi, Hareidi-Light, Conservative, Reform, Reconstructionist, Egalitarian, Modern-Orthodox, Right-Wing YU, Left-Wing YU, Chassidic, Lubavitch, Satmar, Belz, Sefardic, Morrocan, Persian, Edut-HaMizrach, Zionist, or Post-Denominational… None of those questions were asked, nor did they matter. There was only one fact which was important and which mattered: my brothers and sisters were killed. That’s all that mattered.

My family was murdered in cold blood. And I will remain scarred and traumatized for the rest of my life. Unfortunately, too often it takes a crazed maniac who sole purpose is to kill Jews to remind us and awaken us to the reality, that indeed, we are all one big family. And now that some of the family has been killed, the rest of us must weep and mourn and plead to Hashem that this never occurs again.

We must strengthen our feeling of togetherness with all Jews and realize that just as Hashem is Oheiv Amo Yisroel (He loves His Jewish people), so too we must reawaken and reinforce the realization that in the final analysis, we are all one family and we must all love each other, irrespective of the type of head covering we wear and irrespective of if the other Jew chooses to have no head covering.

May the families who lost loved ones be comforted among the mourners of Yerushalayim and Zion and may all those injured, including the brave law enforcement officers who valiantly confronted this nefarious delinquent have a complete and quick healing and a total refuah shelima.