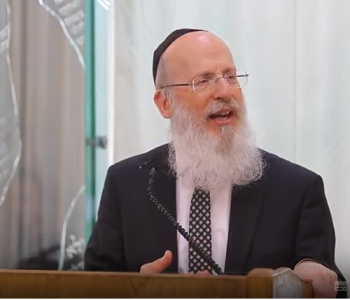 There have always been epidemics. The world was so simple. Although they spread, relative to what’s going on today, they were confined. Face it, between technology and travel, the world has gotten very small. From one individual somewhere in China, all of humanity is going out of its mind. This is definitely a result of the fact that the world is so advanced.

We’re not Nevi’im, we’re not prophets here, but it’s difficult not to take note of the fact that humanity has felt so much in control of everything, that this whole situation is humbling. People are especially scared because they’re not used to this. We’ve been made to feel so secure because we are so much in control of everything. Modern medicine, how we’ve come such a long way. It’s humbling. It’s humbling when you read what doctors have to say. Some are honest and say, “We really don’t know. We’ve never dealt with this virusbefore.”

We’re humbled. We’re humbled by this microscopic particle that is making the whole world crazy. People’s sense of security is gone. Look what’s going on financially. Our lifestyles are changing totally. There’s a real fear.

The very first thing we’ve got to do is catch ourselves and remember we don’t run the world. For anyone who understands that there’s Divine Providence – we are being reminded that although the Almighty has given us so much wisdom, with all of that, there’s so much we don’t know and there’s so much that’s beyond our control. Then ultimately, if we recognize that He loves us and we count on Him and trust in Him, we’ll be fine. Everything he does is the best for us even though we don’t understand it. We’ll be in a whole better place. The first thing is just to recognize we don’t run the world. We don’t know everything. There’s Someone bigger than all of us. With the tiniest thing, He can just change the face of all of humanity.

But I’d like to talk about some other parts of it. People are panicking. For the most part, most human beings are not really in danger. Face it. For most people, even if infected, G-d forbid. So it’s a bad flu. Those who are autoimmune compromised, including the elderly, for them it’s an issue. But for most … So what is it? We have a responsibility to everybody else. We have a responsibility to all of those people who are vulnerable. We have a responsibility to all those who are autoimmune compromised. So all of the measures that are being taken are not for our own selfish sake, but for the sake of others. So that we don’t get others in a position where their lives are in danger. Certainly not in proportions where the medical facilities, the medical establishment will just not be able to handle it. Which means that everybody’s really got to focus on the fact that all the precautions we’re taking are not because we’re scared out of our wits, but because we have a sense of responsibility, because we care about the rest of humanity. We care about everybody else.

You’ve got to feel that. You’ve got to take things seriously. You know, whatever decisions are being made locally; I’m talking from Israel. Israel is a relatively small country. The claim is that with extreme measures, it can be contained. It can really be contained to the point that they think they can rid the country of it. So the measures are extreme, everything’s in turmoil, they closed just about everything.

America is big. The goal with slowing coronavirus down is so that when people do take ill, those who need medical attention, will be able to receive it. Every place, every city has its own laws and rules. Make sure to live by them. You take this seriously, but not because you’re scared that something’s going to happen to you. People are panicking. For most people, it’s totally unnecessary. What we’re talking about is a bad flu. It’s uncomfortable and inconvenient, but feel that sense of responsibility for everybody else. Feel that I’m being cautious, I’m being cautious so I do not catch something that I could, G-d forbid, transmit to others that will eventually end up with someone whose life will be in danger. That means what should most occupying our minds is a sense of responsibility and feeling for others. That’s a wonderful thing to focus on. I say once you’re there, it would be a great idea to revisit some of your old relationships, the ones who’ve given up on. The people who you’ve written off, the people who in your mind are problematic, and maybe start thinking about them in a more constructive way.

This is really the mindset. So no panic and no personal insecurity, but a strong sense of responsibility and a very strong one. Certainly following the rules. It may not be a bad idea to think about going past some of the rules and seeing a little bit into the future. Not in every place have they taken the measures that are really necessary yet, and you may want to do that. In terms of holding public gatherings, giving public classes with lots of people around, today you can give classes online. There’s no reason why you have to go and endanger anybody. This is really the mindset I believe.

Just to get back to things. First of all, to remember we don’t run the world. There’s Someone bigger than us up there. Despite the fact and perhaps because of the fact that we’re so advanced, this has caused so much trouble, it has spread so quickly all over the world and has caused the kind of damage that could never have been done in previous generations. So recognize that the One Above has shown us how this microscopic virus can go and set everything haywire; there’s Someone bigger than us. Learn to trust Him and know that He does love us.

Second, recognize that it’s not you who’s in danger. It’s others. You’re not walking around panicking because you’re afraid of what’s going to happen to you, but you’re walking around with a great sense of responsibility.

Let me conclude. There was a Torah commandment of prayer in time of trouble and time of need. People are looking around for the magic potion. What do I say that will save me? And a lot of things out there. We’re not into the magic. There’s a Torah commandment to speak to your Creator, to give us some advice on how to run the world because He wants to hear that from us. He is the address. To let Him know, to let Him know that we care about humanity, that it pains us, and we beg, we beg that He put the pieces back together again. That He puts an end to this threat and an end to the turmoil that all of civilization has found itself in.

So everyone should be praying. A prayer could be in your own words. In fact, it’s probably more effective when you say what you mean and mean what you say.

May the One Above hear all of our prayers and may this come to an end in a happy-ending. May we one day find out that it was actually for our benefit and He does love us after all. Then hopefully, in the not so distant future, this world will be a much better place to live in. May you all be very healthy.

Rav Yitzchak Berkovits is the Rosh Yeshiva of the Aish HaTorah Yeshiva in Jerusalem, and the founder and Rosh Kollel of The Jerusalem Kollel.