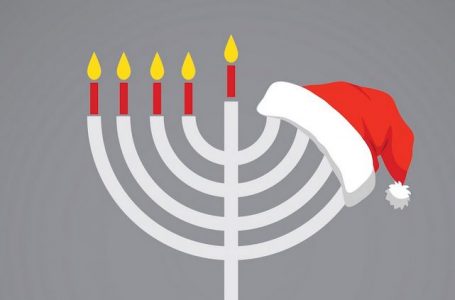 The actors Kurt Russell and Goldie Hawn, “partners” in real life for over 35 years, are starring as Mr. and Mrs. Claus in an upcoming Netflix holiday movie. The New York Times thought this was an auspicious moment for the couple, who rarely star together, to be interviewed. As the conversation progressed, the Times asked the couple how they personally experience the Yuletide season, excerpted below:

(NYT) Christmas at the Hawn-Russell home seems like a big deal in real life, too.

HAWN I just can’t even tell you; it’s more than Christmas. This year, we’re going to be here (LA), but normally we’re in Aspen. It’s a fantasy: the snow and the kids and all the stockings hanging from the fireplace. And Kurt in his Santa suit——

RUSSELL I’m very careful about what I say about this because we have grandkids who will see this stuff.

RUSSELL Right, right. After we have Christmas Eve dinner we always have somebody read “The Night Before Christmas,” and then we track Santa’s movements on the app. Right after that, you start getting things in shape because at any point he can show up.

(NYT) Goldie, you were raised Jewish. Do you still keep any Hanukkah traditions?

HAWN Growing up, we’d light candles for Hanukkah, but I think my mother stopped lighting them because I was on the phone once, and I backed up to the Hanukkah candles. You know the wall phones back in the day? I had wrapped myself in the cord, and I caught on fire. I literally burned my robe and my back. It’s like, Baruch atah …. My mom came, and they unraveled me and, thank G-d, I’m fine.

Goldie’s reflection on her aborted Chanukah connection could have taken a different turn. After all, would Mrs. Hawn Senior have thrown out the oven if her daughter backed into the stovetop instead? So, it becomes a question of learning the importance of Chanukah. And if one were to suggest that America is a melting pot and we don’t like to accentuate our differences, the facts on the ground are that people today do take a stand. Just in this month’s The Atlantic, Emma Green reports,

Many parents feel an intense attachment to their children’s political identities: 35 percent of Republicans and 45 percent of Democrats said they would be unhappy if their son or daughter married someone from the opposite political party, a 2019 survey from The Atlantic and the Public Religion Research Institute found. This gulf between the parties has widened in 2020… In a concrete way, November’s election really did seem to be about the future of America’s kids…

Even a wholesome magazine like Highlights couldn’t avoid the culture wars.

Whatever was once PC, is no longer the case. So just as we feel the need today to affirm and teach our children the importance of our political beliefs, we can also feel liberated to explore spiritual, ethical and religious values and make a decision about which of those ideals resonate, and encourage our children to follow in our path.

Chanukah is the perfect time to jump-start such an exploration. In fact, the very philosophical ideas that were debated and actually culminated in the very founding of the festival are still pertinent and contested today. This notion, as explained below, is based upon the teachings of Rabbi Yitzchak Berkovits, Dean of The Jerusalem Kollel, and Rosh Yeshiva of Aish HaTorah:

The striking aspect of celebrating Chanukah each year is the realization that the very same ideological battles that were fought 2,200 years ago, which prompted the Syrian-Greek offensive against the Jewish people culminating in the Chanukah miracles, are still being waged today and are poignantly relevant to the life of every Jew. How can this be?

The Syrian-Greek war against Israel, replete with tank-like elephants and over 100,000 skilled soldiers, seems like an anomaly to Greek philosophy. The Greeks, home to the schools of Plato and Aristotle, sought to systematically understand and classify knowledge of the world. They were primarily intellectuals, not militants. Why would the Syrian-Greek army attack the Jewish nation? Israel was not a military threat. The Syrian-Greek target was Judaism and Judaism alone; Jews who adopted the Greek worldview (Hellenism) were embraced. Hellenism was certainly a challenge for many Jews attracted to the intellectualism and logic of the Greek culture that postulated that man created religion. Nevertheless, what was so appalling to the Syrian-Greeks that they sought to destroy Judaism and her adherents?

The Greeks taught that man was the center of the universe. There is no G-d. One does not look beyond the physical world. It is man who has the need to create G-d. In contrast, Judaism teaches that man is “almost” at the center of the universe; rather the primary focus is G-d Who created, sustains and guides the universe, creates man with a Divine soul, and empowers us with the ability to impact both this world and eternal spiritual worlds that transcend physical existence. The Greeks could not tolerate that the Jewish people lived Judaism as a dynamic reality, which was an affront and threat to Greek thought and culture.

2,200 years later, the Jewish world is still divided – between those influenced by Hellenism, who view Chanukah, and hence Judaism, as “tradition,” something of sentimental value that contributes some meaning to life, but ultimately is not “real”; and in contrast, those who see Judaism as a reality where each action has cosmic implications. (Olami Morasha Syllabus, Chanukah I.)

So, go ahead, light a Chanukah menorah (in a safe place) and find yourself a teacher to illuminate your life, like you never imagined.