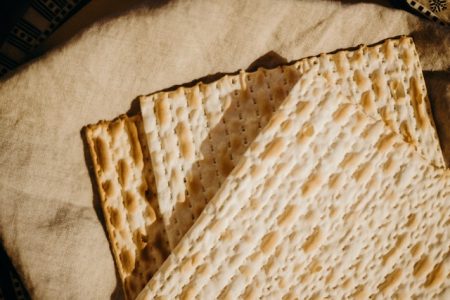 The single most practiced Jewish ritual today, which outdoes any other Jewish activity in the cycle of Jewish holidays, is the Passover Seder that occurs on the first evening of Passover. Although this ritual takes many forms these days, with many different foods and customs (of which not all are traditional), it remains the most popular religious activity among Jews, and it is usually celebrated in a family setting. This chapter will try to discern and understand certain aspects of the traditional Seder, in order to point out the underlying Jewish values of Passover and of Judaism as well. (For an in-depth discussion about Jewish freedom, the central idea and reason for the celebration of Passover, see the chapter about the Jewish Concept of Freedom.)

NO SEDER/ORDER IN THE SEDER

The name of the entire process for the first night of Passover, or Pesach, (and the second night as well, outside of Israel) is called the Seder, which means “order.” This name clearly implies that all of the mitzvot-commandments, rituals, symbols and Tefillot-prayers of the Haggadah are arranged in a particular and meticulous sequence, just as name for the Jewish prayer book, Siddur, also implies a specific order and arrangement.

Yet even a cursory analysis shows that there seems to be no particular organized arrangement to the events and process of the Haggadah, especially when compared to the “order” of the Shabbat evening meal, or all other Yom Tov Festival evening meals. Normally, at each Shabbat or holiday meal, the first ritual of the evening is the Kiddush recited over wine. Afterwards, Jews ritually wash their hands for bread, Challah, or for Matzah (which can be used by Ashkenazic Jews as bread during the entire year), and then recite a prayer over this ritual washing.

The washing is followed by the Beracha-prayer over the Challah or Matzah, and the entire meal is then eaten in earnest. But on Pesach night, while the meal seems to start off in a similar manner — with Kiddush followed by ritual washing — there is no blessing at all following the washing. Moreover, the Matzah is not eaten. Rather, a green vegetable is eaten instead. Although one would normally expect the full meal to now be served, nothing more is eaten for an entire hour or longer. Rather, in the next paragraph, Jews invite people to join their Seder. Why invite them now when there is no chance anyone will join them at this point? This also seems to make no sense and is “out of order” of any logical sequence.

The next order of business is the asking of the Four Questions, but not one of these questions is specifically answered at the Seder at all! Many verses are recited, but without any apparent order to join them thematically. What is really going on here? Why, then, was each of these steps in the structure of the Haggadah instituted by the Rabbis? Why does there seem to be no order, and no connection between the different parts of the Haggadah? Are these merely a series of rituals, prayers and verses, or is there any justification for the name “Seder”?

In order to understand that the entire evening is indeed arranged in a particular order – Seder – one must first be cognizant of four overriding fundamental principles that helped guide the Rabbis in assembling the Haggadah, its contents and sequence.