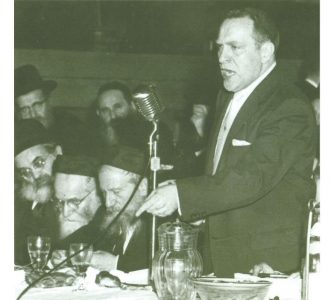 The legendary Mike ‘Elimelech’ Tress impacted so many people in his short life.

The Jews he saved during and after the war, together with his efforts at stemming the spiritual holocaust in the US, were the more well known part in an amazing legacy he left over.

Mike was a master communicator.

His communication skills were a major factor in empowering the youth to act for the klal to save and build Am Yisrael.

His biography* gives us a glimpse into how he was able to influence others.

The short excerpt gives us three key insights into how this visionary leader got others to take action:

“He never stopped talking about the necessity of getting the youth…”

Repetition is the key.

Share your vision, with yourself, your team, your donors, with anyone connected with what you do. Repeat your vision with everyone. Repeat it often. Never stop talking about what you are working to do.

If you want people to act, you must have a clear vision. It has to address a problem. And it has to be repeated often.

“…and the dire consequences that would follow from failing to do so.”

What will be lost if your listeners don’t follow through. And what will be won if they do.

Make it clear. And make sure the stakes talk to their heart.

It’s a key to get people to act.

“If we can get another five boys, they’ll each bring in another five” was the battle plan from which he never wavered.

Every vision has to have a clear and actionable plan.

The plan has to be simple enough to share with others and for others to share. Clear enough to act on. Bold enough to make a difference.

In the week ahead – despite our unified pain we feel as a nation right now – how can Reb Mike’s wisdom guide your efforts for Am Yisrael?

*Excerpts from the 1995 biography ‘They called him Mike. Reb Elimelech Tress’ by Jonathan Rosenblum, quoting an interview with Eli Basch, Pg. 73.

See past fundraising posts or learn more at avrahamlewis.com