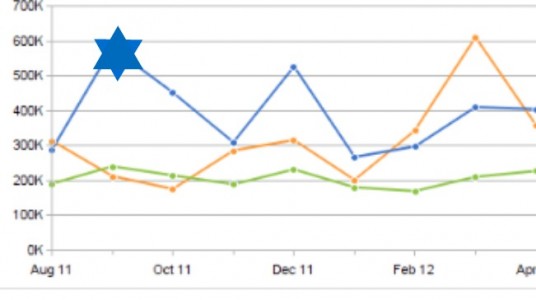 The Jewish web has being growing fast in the past five years, and that includes in the Orthodox sector.

Naomi Elbinger has compiled a list of the top sites in various niches of this market and has graciously allowed us to use her graphs and parts of her findings.

This list will be of interest to our readership for three reasons:

A disclaimer: All this data comes from compete.com, which is considered the most accurate web traffic measurement tool. However, it’s certainly not perfectly accurate, especially for non-US traffic.

The winner for the World’s most popular Orthodox Jewish Website is either Chabad.org or Israel National News (AKA Arutz Sheva).

This graph and all the others on this page track unique visitors per month over the course of the last year.

Aish.com is a not-so-close third. All three have tremendous amounts of traffic and are far ahead of all the other contenders.

Of course, it should be noted that while all three sites are openly Orthodox, they all target a broad audience, and a significant percentage of their readership are non-Orthodox or non-Jewish. Still, their readership are sympathetic to Jewish causes and may also want to contribute online to your cause/fundraiser.

On other hand, there are several big news sites that get major traffic that is almost exclusively Orthodox Jewish. The Yeshiva World News and Vos iz Neias are neck-and-neck, and both immensely popular with the yeshivish/chareidi audience. Matzav.com is a less popular version of the same. The Jewish Press is viewed as a more religiously centrist news outlet. OU.org is not strictly a news site, but it does host the popular Jewish Action magazine.

According to this chart, The Jewish Press has been a big winner over the past six months.

Moving down the line, we have the next group of contenders: Torah.org, which is a Torah learning content site; OnlySimchas.com, a community site where users announce their celebrations and milestones (it has a younger demographic); and ImaMother.com, a forum that is immensely popular with married Orthodox women.

ImaMother.com is the only site in the top 11 that targets women and is hugely popular with advertisers as a result.

What’s interesting about these stats is that it does not appear that most of these sites have grown much over the past 12 months. In fact, a slight decline in traffic seems to be more normal.

All in all, we are certain that this study is revealing and will help you on many levels in the coming months.