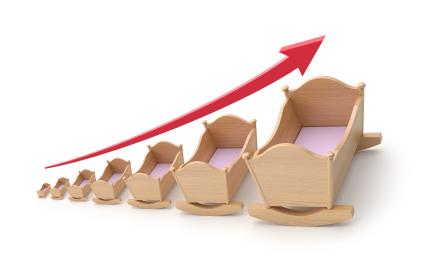 Comparable to the threat that intermarriage has on American Jewry is the dramatically declining birth rate.

The majority of Jewish women aged 30 to 35, as well as the overwhelming majority of younger women, has no children. The low birth rate, which has been ongoing for the past 20 years, is insufficient to produce a succeeding generation for today’s adults.

The overall 2011 USA average is 1.86 children per Jewish woman, compared to Israel’s 2.98, from 2.53 in 1995. (Of the 141,500 population increase in 2011, only 19,289 were attributed to Aliya.) Had the 3.3 children in “modern Orthodox” families, 6.6 within Haredi and 7.9 among Hasidim, not been factored in, the US number would decline to 1.4. Furthermore, only 12 percent of the Jewish community is eighteen and under. And among synagogue-affiliated Jews, the Orthodox sector already contains more children than the Reform or Conservative.

We may take momentary joy of the Orthodox triumph, but we ought to be deeply disturbed. Even without intermarriage, the massive attrition to the Jewish nation will result due to the low birth rate. Jews have the fewest number of siblings, the smallest household size, and the second lowest number of children under eighteen. In terms of median age, Jews are seven years older than other Americans.

When all is said and done, one can question the value of increasing the overall Jewish birth rate if it is not accompanied by action plans to keep all those newly born solidly Jewish. After all, why increase the total number of Jews if we are only reaching a small percentage with some element of Jewish content today? I will leave you to ponder that one.