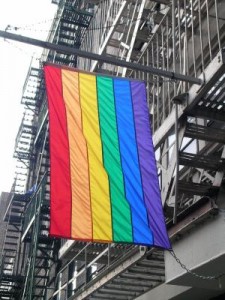 Rabbi Shmuly Yanklowitz’s recent blog, entitled 5 Reasons Being an Orthodox Rabbi Compelled Me to Support Gay Marriage[1] is a masterful compilation of  misrepresentations and false logic woven into a compelling tapestry that sounds like a brave liberal position, but is actually a mighty act of manipulative cowardice.  “I believe the essence of religious conviction is that we must do what is right” is fine as a philosophy for someone who wants to put together his own religion, but not for someone who claims to be an Orthodox rabbi. He ends that sentence, and “not [to do] what is popular“.

The Jewish position on gay rights is everything but. But Rabbi Yanklowitz wants to style himself as the trailblazing hero, instead of the man who went panting after current mores as is in fact the case.

Judaism has a very sophisticated and comprehensive legal system, one that, in my belief, inspired much of Roman law, the basis of Western law today. People often ask why that is – why does God care about the details?  The simplest way to get a grip on this is to understand the extraordinary detail of the physical system at any level – atomic, molecular, ecosystems – and to appreciate how the tiniest differences can produce the largest consequences. Precision is the key here.

So when Rabbi Yanklowitz dispenses with what Judaism actually says by saying that “the theological issue is complicated” and then breaks out into “but the moral issue is increasingly clear,” we know already that this is not Judaism that he is speaking of.  He too recognizes this when he says, “Traditional Jewish law has no established model for gay marriage,” put so mildly that the quick reader would miss this, and then makes sure that anyone who catches it will immediately read his dismissive, “but this is an entirely separate matter”.  His way of dealing with the verses in the Torah which unfortunately contradict his stand amounts to, “Well then we will just jolly-well have to reinterpret those words so that they fit into my position.”  Rabbi, please tell us: Are you talking in the name of Judaism or secular humanism?

It sounds so heroic to be bold: “Faith leaders must stand as public allies; private support is no longer enough” and “I take the pervasive biblical call for justice very seriously”   but first, my dear rabbi, you have to prove what you are being bold about. You actually have to prove, from primary sources, that your position is a Jewish one. And you know it is not, because you won’t – in fact, can’t – officiate at gay marriages. “Fifteen states and counting have formally approved marriage equality,” making it “time that traditional faith leaders stand for … the right to marriage,”  is great for a religion that says “stay with the times as your meta-principle,” but it  just ain’t going to hack it as an argument representing the Torah of the timeless people.

Judaism is about details and not just grand moral posturing. I have enormous empathy for the pain of others, but that does not turn me into God. As a Jew, I must do the utmost I can to ease anyone’s pain, including gay people, but Rabbi Yanklowitz seems to have understood that this is an enabling principle. He says the equivalent of “how would I feel if I were denied the legal ability to marry and have a family” and then moves on to say that ipso facto we must advocate for full rights for all others to have do the same.

Wait a minute! I have debated others on this topic, and there have been sophisticated arguments on either side: “What comprises a family?” “Is marriage a separate notion from other legal rights of two people committed to each other (the rights to inheritance, or to make decisions for one’s partner in a medical crisis” for example)?”  But empathy itself cannot be our moral compass.

Paul Bloom, recently wrote an excellent article in the New Yorker on just how poor a moral guide empathy really is.[2]  When Natalee Holoway went missing in Aruba in 2005, “the story of her plight took up far more television time than the concurrent genocide in Darfur”.[3]  Similarly, the tsunami of 2004, Hurricane Katrina and Sandy solicited an enormous outpouring of volunteerism of every sort, but “each day, more than ten times the number of people who died in Hurricane Katrina die because of preventable diseases, and more than thirteen times as many perish from malnutrition”. Bloom brings numerous similar examples, explaining that we empathize with those with whom we can identify and not push into the background suffering and need of a vastly greater scale.  Experiments in the lab showed that volunteers would give far more money to save one child whose name, age and picture were shown to them, than they would for eight children they knew nothing about.[4]

“Imagine” says Bloom, “reading that two thousand people just died in an earthquake in a remote country, and then discovering that the actual number of deaths was twenty thousand. Do you now feel ten times worse? To the extent that we can recognize the numbers as significant, it’s because of reason, not empathy.”

Here is the key to Rabbi Yanklowitz’s mistake. He confuses empathy with ethics, and wants to reduce Judaism to his own feelings.  Parents in India who mutilate their children at birth in order to make them more effective beggars do indeed solicit more charity as Bloom points out. Empathy will only lead to a perpetuation of the problem. We need a different basis to our ethics.

What we are trying to do in the case of gay marriage is to really understand what the long-term consequences for society are. The complexity of such discussions is engendered by the fact that different values often clash. We limit some people’s freedom to provide equality to others’. We prevent people from choosing incestuous or bestial relationships because of the harm they will do to their children and to the society as a whole. We are constantly making choices out of the grey.

Of course, the pain and the suffering any decision may cause or alleviate have to be a part of the equation. It is significant, morally, whether gay people are in more or less pain. Judaism does exhort us to reach into our own history of national pain, for example, in order to be more welcoming to the stranger in our midst.  But it cannot become the only value that we consider.  What value we give each variable is an awfully complicated business. And it is simply confusing to pull at our heartstrings with a simplified argument in the name of empathy.

I was once involved in trying to get hold of an experimental drug being developed at Duke University that might have saved a patient.  The person was not eligible to receive it on any clinical trials and getting it on purely compassionate grounds required careful consideration. The person got the drug, but too late to save them. It never occurred to me that there had been a lack of empathy here, just as I never saw anyone’s position on gay marriage as reflecting more or less empathy. Accusing the other side of being coldhearted is, in fact, an unfair argument. It moves the discussion from the mind to the heart, and the results might only reflect the right answer by accident.

Starting with the French and English philosophers of the 17th and 18th century, the Western world took some amazing moral leaps. The entire old order of man was overthrown and replaced by freedom, equality and the dignity of man. Democracy and the rule of law, fairness and accountability – all were put into place in fits and starts. War amongst democratic countries virtually ceased.  Capitalism, combined with medicine and other sciences, revolutionized standards of living. Violence and crime no longer occupied our daily lives. Every person was endowed with inalienable rights, by mere virtue of being human. All of this is truly remarkable. Although empathy may have been lurking in the background, the writings of Voltaire, Lock, Diderot, Mill and others hardly ever mention the word.   I don’t think we would have come nearly this far if we had relied on the sloppy moralizing of the Rabbi Yanklowitzes of this world.   I empathize with my wife’s finger more than I empathize with the suffering of millions who go hungry every day. This is natural. Bloom gets it right when he says, “Empathy is what makes us human; it’s what makes us both subject and object of moral concern. Empathy betrays us only when we take it as a moral guide.”

Rabbi Yanklowitz also takes sides (without realizing it, I think) with those who limit the harm principle to physical rather than spiritual harm. (“We have no right to coercively prevent, by force of civil law, an individual from enjoying true happiness and fulfilling their life potential when it poses no harm to any other.”)  Would the good rabbi then agree with the recent ruling of a Swedish judge that ruled that public masturbation was legal because it did no harm to anyone else?  But the American liberal tradition does not agree.  We ban hate speech, even though freedom of expression is an elevated ideal. We ban discriminatory language against women in educational and workplace environments. We ban nudity and applaud zoning laws that drive out sex shops and striptease nightclubs from residential areas.  We obviously do adhere to a stricter standard of the harm principle and so we must have a reasonable debate about whether gay marriage is included in that as well.

Jews should, as Rabbi Yanklowitz says, be the supporters of causes of all who are oppressed and discriminated against – but he leaves out a vital detail; we must oppose discrimination against anyone for the sole reason of who they are or what they look like.  However, when we exclude special ed. kids from Harvard based on their SAT scores – while that is discrimination, because they certainly did not have an equal chance to those who had a genius IQ – it is a necessary discrimination for society to function. And reverse discrimination would do more bad than good. We ought to forcefully and rapidly get rid of any discrimination against gays that reflects homophobia. We must punish perpetrators of harassment and stigmatize those who exclude gay people, just because they are gay. But we cannot use that as a stick to end conversation about whether gay marriage would harm society.

I and my colleagues are interested in having that conversation with those who disagree. But we gain nothing by Rabbi Yanklowitz’s conversations-stoppers – sentences like “granting full and equal rights is the only moral option.”

Rabbi Yanklowitz and I do agree on one point.  If we focus too much on this issue, it will distract from other very pressing issues that we, in the Orthodox community, should address. In fact, I have only twice written on this issue in recent years for that very reason. I will go further.  As I have written elsewhere[5], the main assault on the concept of marriage in America today is not gay marriage and we will not restore family as a core ideal by fighting gay marriage.

I was only aroused to address this issue because an Orthodox person, a rabbi to boot, claimed: “I am pro-gay-rights because I am an Orthodox rabbi, not in spite of it.”  No, you are not; you simply don’t have a clue what you are talking about.