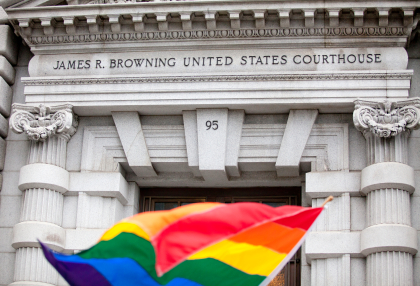 Gay marriage has exploded onto the scene. Only ten years ago, gay activists could not have dreamed that gay marriage would have been legitimized.[1] State after state seemed headed in the opposite direction.[2] Today, it is just a matter of time before gay marriage will be approved everywhere. A number of states have already gone this route, and soon the Supreme Court will opine on this.[3] All the “’hip”’ politicians have looked in the mirror and decided that this is the side they have to be on.[4] Society now wonders aloud,“ Why should we discriminate against gays? Why should they suffer? Why should we not knock down the last frontier of bias and bigotry in a country which trumpets equality?!”

The language has also changed. Gay marriage is now reframed as marriage equality and the freedom to marry. It has become a civil-rights issue; even a human-rights issue supported by 131 Republicans. It is unfair and unjust to exclude an entire group from the privileges of marriage. We wouldn’t restrict marriage by race; so why restrict it by sex.

Literally centuries of the accepted norm in what constitutes marriage are being overturned in a half breath of history. Arguments about how marriage has always been defined in the Western world are regarded by gay-marriage advocates as nothing short of a ridiculous appeal to the nostalgic past, with no moral bearing on the current situation. They would be totally at a loss to understand arguments about marriage as an institution of society, in addition to being a private choice. This rush into a whole new set of norms, where a debate that alters the future of Western Civilization is decided on a breathless turn, is a stretching of the fast and more superficial world to the moral arena.

The anti gay-marriage coalition comes off looking bad. Desperate to hold the ground that was once the consensus of Democratic and Republican Presidents and the vast majority of the population, they are throwing any argument they can into the ring. Children are better off with a mother and a father; gay marriages cannot produce their own children; Western society has always been built on the unit of the family… But the other side has answers to all of this. The media had sided fairly and squarely with the gay-activists. The Supreme Court is being called upon to be the right side of history.

At this moment, while the world focuses on gay marriage, and Orthodox Jews – among others – struggle to explain their support for traditional family structures, we must take a solemn look at marriage itself.

The trouble is that modern marriage is in total disarray. There is not much to stand for. Imagine marrying the love of your dreams and knowing that you had just as good a chance of divorcing as of staying together. Divorce rates are rising for older aged people as well. (And a large percentage of marriages that do last are not happy ones.) One can then readily understand why a majority of those in the primary marriage-aged group – 25 – 34, have decided to stay single!

The idea of a lifelong commitment has been severely undermined starting well before marriage. The idea that children deserve to grow up in a house with two parents in a stable domestic atmosphere has been significantly eroded. Sex has become detached from any idea of a meaningful relationship, let alone from marriage. Students – straight and gay — are forced into a system of hooking up, the essence of which is emotionally unattached sex lasting a matter of hours. Most are dissatisfied with this – but they are trapped into a system that leaves them no escape.

Instead of being the culmination act of a spiritual, emotional and intellectual act – a unification of souls – the sexual act has now become a purely physical thing – an act of instant gratification. And that act is an act of taking, not giving.)

But, it is not only sex that is the problem. A recent article propounding the virtues of marriage was all about taking. But we know that it is giving, not taking, which leaves people satisfied. Marriage is a framework in which a person can commit to a life of giving to another and through that to reach the ultimate act of giving – the giving of oneself totally in an act of unification. He or she who looks on marriage as some kind of business calculation — how much did I get out and how much did I put in — will inevitably find a period when the inventory says that the business is not good and it needs to be closed.

Adam Grant of Wharton School of Business in his new book, Give and Take, starts with a premise that turns the thinking behind those theories on its head. The greatest untapped source of motivation, he argues, is a sense of service to others; focusing on the contribution of our work to other people’s lives has the potential to make us more productive than thinking about helping ourselves.

So, if we want to get to have a dialogue about the beauty of opposite sex marriage we had better get our marriage-act together. The majority of children being born in America to young mothers are born out of wedlock – where is the public on this issue?

Do we Jews have anything better to say for ourselves? Not if we look at the leaders in a recent study of Jewish organizations. Only 57% of respondents were married, and 35% were single. About 7% said that they were living with a significant other. And these are our leaders!

At this stage, saving the whole idea of marriage as more than just one in the mix of choices is going to take more than a study or the rare plans which get so little publicity. We had better find a society where marriage is all that we want it to be – a sacred union between partners looking to give to each other, to their children and through that framework to the broader world — a union that slowly unfolds into a deepening love through the long-term investment of trust, sharing and commitment.

Were sociologists and anthropologists to scour the far corners of the earth they would indeed discover such a society. It is the society of Torah-observant Jews. Torah-observant families still have a high success rate of good marriages.

For sure, the Orthodox world has also drunk from the toxic waters of the American spring. We are not proud of our divorce rates, nor of the attitudes that some of our youth show to towards fulfilling their lifelong commitment. But, for any marriage advocate, we are a dream come true!

First there is the shidduch system. Imagine a girl and boy going out. They have no hidden agendas — both are checking each other out with marriage in mind. Because they are committed to not even touching unless they decide to get married, they are forced to take walks and picnic, to drink coffee, and to talk and talk. Sounds quaint and outdated? But it really works. And it heightens the expectation of the marriage itself being something very sacred and special.

The dating couple knows a huge amount about each other – this is no hit or miss at a party or a night club. Since they had virtually no contact with the members of the opposite sex except for close family, everything is awfully romantic, everything fraught with meaning. (Remember romance in pre-hook-up days?) I know – because I found my dear wife on just such a shidduch. When we proposed, it was the most memorable experience on earth. And still no touching — until after the wedding.

Sure not every Jewish marriage is bliss. But then there is commitment that carries one through. No fault divorce exists in America as a part of the “We don’t want to be committed” package. Judaism also allows for divorce. But it is not a default and certainly not a no-fault option. If one were to default, it should be towards staying in the marriage, not towards divorce.

So, gay marriage is coming. If it is anything like male-female marriage in the USA, it won’t amount to much. I suggest that those who are disturbed by this whole idea take a long look at the history of the sexual revolution, delayed marriage, alternative life-styles, college hook-ups, marriage for the wrong reasons and divorce rates… Address all of that and you will be welcome to the party.

2. On November 2, 2004, eleven states passed constitutional amendments defining marriage as being between one man and one woman. Later, an additional eight states were joined them, followed yet again by the famous Proposition 8 in California, approved by voters. All of these amounted to mandates or actual ammendments to ban same-sex marriage.

3. At the end of March, 2013, the Supreme Court began to hear oral arguments on Hollingsworth v. Perry, otherwise known as the Proposition 8 case. In addition, it took on a case dealing with the Defense of Marriage Act (DOMA), which prevents federal recognition of state marriages between people of the same sex. DOMA – the Defense of Marriage Act, was signed by President Clinton in 1996. It defines marriage as the union of a man and a woman, and applies that definition to about 1,100 federal laws and programs. Same-sex couples are prohibited from collecting many federal benefits available to other couples.

4. These include former President Clinton (who signed DOMA into law),Hilary Clinton, Laura Bush, and President Obama.

2 Responses to “A Rabbi’s Thoughts on (Gay) Marriage”