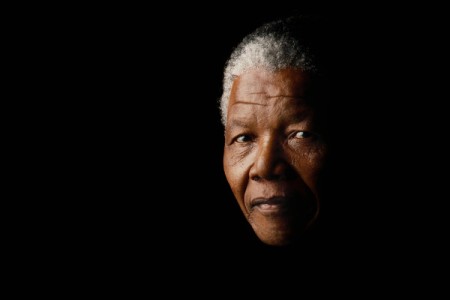 Jews have always been willing to learn from non-Jews. The Torah profiles Noach, Yisro and others. The Chumash tells of the greatness of Yisro (even before his conversion). The Sages bring Dama ben Nesina to illustrate how far we should go in honoring our parents.

Nelson Mandela, the person and the leader, can teach us a lot, despite his complicated relationship with the South African Jewish community and the State of Israel.

Mandela was a great man. In a century where the super-evil Stalin and Hitler were the most famous, he was one of the few non-Jewish inspirational figures of the last century. Here are some of my take-aways from this man:

1. The greatest source of Leadership is good character.

Roosevelt may have legislated more boldly, and Churchill may have had a greater grasp of history, but no other head of state created change by virtue of his sterling character.

There is nothing more pathetic than a bitter man. Eaten up inside, spewing venom on the outside, such people live for what or whom they stand against, not what they stand for.

If there was anyone who deserved to be bitter, it was Nelson Mandela. He was born in 1918 into a South Africa ruled by the British, and by the age of 22, had already earned his first expulsion, from the (all-black) University of Fort Hare, for leading a student strike. In 1964, he was to earn a life sentence (with six others) on Robben Island for treason. He was sent to that stark blotch of land that is clearly in view from Cape Town, a daily and scary message for all who would choose to take in that magnificent sweep of the sea. We knew he and his colleagues were there, year after year, but we dared not say anything. He could no longer be quoted. His photo could no longer be printed. He was to disappear.

But Nelson Mandela never wallowed in his own misery. How could we have known that this man used those “long, lonely, wasted years,” (as he put them) to prepare himself for greatness by focusing on his own character? In prison, he stated, “You learn to look into yourself.” Deprived of external accomplishments, you learn “to focus on internal ones; such as honesty, sincerity, simplicity, humility, generosity and an absence of variety.”

Many of us suffer what we perceive to be injustices at the hands of others. Madela should be our model of how to move on and up.  He always looked forward to reconciliation instead of dwelling on the crimes of the past. He knew that his greatest pitfall would be to begin hating others instead of reaching out to them.

3. You are never too old to begin accomplishing.

Mandela sat in prison for 28 years, until he was 71 years old, turning down several compromise offers from the government that would have secured his release. We could have expected him to limp home, a broken and disheartened man, but he came out with dignity, with more than a whiff of royalty, tough, determined and calculating, but generous and humble, all in one.  A year later, Mandela was president of the country – he had just begun the life that most of the world remembers about him.

4. The more committed you are to your beliefs, the more meaningful your life is.

At his treason trial, Mandela stated:  “During my lifetime I have dedicated myself to this struggle of the African people. I have fought against white domination, and I have fought against black domination. I have cherished the ideal of a democratic and free society in which all persons live together in harmony and with equal opportunities. It is an ideal which I hope to live for and to achieve. But if needs be, it is an ideal for which I am prepared to die.”

5. If you radiate reconciliation and show dignity and respect to your fellow-man, others will follow your lead.

Mandela’s great partner was Prime Minister F.W. de Klerk, the Gorbachev of South Africa and Mandela’s co-recipient of the Nobel Peace Prize. De Klerk legalized the ANC in 1990, freeing Mandela, and setting the stage for the dismantling of the apartheid regime.   We were all certain that the May 10, 1994 elections would see massive violence, but it never came.

The great, calming influence of that venerable man had seeped into the bones of the fiery black youth, and the new South Africa was born.  ”Never, never and never again shall it be that this beautiful land will again experience the oppression of one by another” were Mandela’s immortal words on that day.  “Let freedom reign. The sun shall never set on so glorious a human achievement! God bless Africa! Thank you.”

To understand South Africa, one has to understand rugby. As a white, rugby was etched deeply into our national psyche. Only whites could play of course, but the (then) 4 million whites were enough to produce the world’s best rugby team. And then, because of apartheid, we were kicked out of international sport.  The last international game was against the French, on local soil. Playing on the French wing was Roger Bourgerelle, who was black, and played opposite the Springboks’ only Jew, Syd Nomis. I remember thinking that the concession by the South Africans to allow Bourgerelle to play (the French wouldn’t come otherwise) and be watched by millions of South Africans, was one of the first cracks in the apartheid regime.

Only if you understand that can you appreciate the scene on June 24, 1995, when Mandela, as president, strode onto the field at the Rugby World Cup final in Johannesburg, wearing “the green and gold” South African jersey and bringing 60,000 mainly white spectators to their feet. To the chants of “Nelson! Nelson! Nelson!” the president gave his congratulations to the winning Springbok team as if to say, “We are all one; rugby is owned by blacks as it is by whites; I am president of the whites as I am of the blacks. We are one nation.”

6. You  leave a legacy  by listening to the call of history.

American leaders are obsessed with their legacy. Second-term presidents make a mad dash to do something – anything – that will allow history to judge them favorably. Mandela never stooped to this. If he made history, it was as a healer of souls. As president, he was not a great administrator of projects. His greatness was the reconciliation he injected into a country that had been torn by racial divisions, a personal example of how our essential humanity ties us more than our differences separate us. God beckoned Nelson Mandela to make history – Mandela heard the call, and stepped forward to change the destiny of a country, and of mankind.

One Response to “What I Learned from Nelson Mandela”