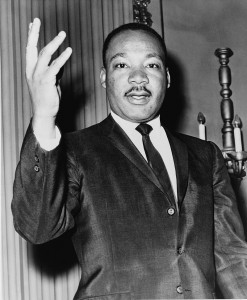 “‘I Have a Dream’ is a public speech delivered by American civil rights activist Martin Luther King Jr. on August 28, 1963, in which he calls for an end to racism in the United States. Delivered to over 250,000 civil rights supporters from the steps of the Lincoln Memorial during the March on Washington, the speech was a defining moment of the American Civil Rights Movement” (Wikipedia).

It was a warm August day in the nation’s capital when Martin Luther King ascended the podium and delivered the speech which “was ranked the top American speech of the 20th century in a 1999 poll of scholars of public address” (Wikipedia).

The speech, complete with its Biblical references and its echoing of American values electrified the audience of 250,000 and helped accelerate the pace of change in American race relations. Few realize that perhaps the primary ‘mover and shaker’ of both the march and the text of the speech was a Jew! Stanley David Levison (May 2, 1912 – September 12, 1979) was a Jewish businessman from New York who had earned a law degree from St. John’s University. Levison was very active in the Civil Rights movement and became an advisor and close friend of Martin Luther King Jr., for whom he helped write speeches and organize events. Levison was King’s right hand man in both planning the March on Washington and in drafting versions of the now iconic speech.

One has to wonder if Levison’s ‘Jewish DNA’ – which instills every Jew with a sense of compassion, humility and desire to help others – was the motivating factor in inspiring Levison to partner with Dr. King. The Medrash (Yalkut Shimoni Parshas Vayeira Remez 82) points out that Dovid HaMelech stated there are three identifying personality features of all Jews: they are compassionate, humble and do-gooders. Levison, as a Jew, still retained his ‘Jewish characteristics.’ We as Jews must also remember to be ‘compassionate, humble and do-gooders’; indeed, Dovid HaMelech declares that only a person who displays these three traits is worthy of joining the Jewish people.

Dr. King declared, “When we allow freedom to ring, when we let it ring from every village and every hamlet, from every state and every city, we will be able to speed up that day when all of G-d’s children, black men and white men, Jews and Gentiles, Protestants and Catholics, will be able to join hands and sing in the words of the old Negro spiritual, ‘Free at last! Free at last! Thank G-d Almighty, we are free at last!’”

Similarly, paraphrasing Dr. King we can state, “When we allow the tolerance of others to ring, when we let it ring from every village and every hamlet, from every state and every city, we will be able to speed up that day when all of Hashem’s children, Chassidim and Litvaks, Modern Orthodox and Hareidi, Religious Zionist and Neturei Karta, will be able to join hands and sing, in the words of Tehillim [118:24]: ‘This is the day that the Lord has made; let us exult and rejoice on it.’”