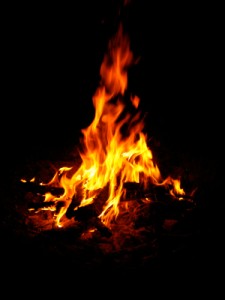 As I write these words it would be very easy for me to join the club. Which club is that?

The club which is enraptured and captivated by the excitement of Lag B’Omer as hundreds of thousands of frum Jews from all segments of Jewry are seemingly sharing a rare moment of unified celebration.

The estimates are that over half a million people will celebrate in Meron at the tomb of Rav Shimon Ben Yochai.

So Rabbi Eisenman, why must you play the contrarian?

What causes you not to join in what is seemingly a wonderful and unified celebration of joy as frum Yidden from every single religious community in Israel are dancing together in harmony and love and unity?

C’mon Rabbi Eisenman, why can’t you just join the masses of celebrants in their merriment?

What could you possibly have against Lag B’Omer and celebrating?

Could it be that you are wary of the harsh words of the Chasam Sofer, who wrote very strong words against the celebrations in Meron? Are you concerned by the fact that he felt it might be a transgression of adding on an additional holiday onto the established Jewish calendar (Ba’al Tosif)?

Or perhaps you are upset, as the Chasam Sofer points out, that the Yahrtzeit of a great man is a time of fasting and not for feasting?

Perhaps, but that is not the main reason for my sadness, as I am aware that there are other equally strong halachic differing opinions.

Perhaps then you are upset because you were told by Maran Rav Chaim Kanievsky Shlita that it is more important to learn Torah than to make the long pilgrimage to Meron?

Why can’t you for once go with the flow and just follow and be part of the wave of people who are frolicking and ‘fressing’, dancing and dining, praying and prancing on this auspicious day?

Why can’t (for once) you just join the crowd?

The reason I can’t be happy is simple. It is because of Yotav and Yaacov the Policemen. Yotav and Yaacov barely know each other. They are both employed by “Mishteret Yisrael” (the Israeli National Police Force) and they both live in Teveria in the north of Israel.

Yotav is married and has two wonderful daughters. The younger one is Adi (which means Jewel) and the older one is Noya (which means beautiful); they are six and eight and attend the local school in Teveria. Yotav’s parents were Moroccan immigrants who arrived in Israel in 1951. They were not were not afforded a religious education and although he grew up in a traditional home, he drifted to a more secular life style. However, Yotav’s wife lights the Shabbos candles every Friday evening and Yotav does his best to avoid working on Shabbos.

Yaakov, who also lives in Teveria, is also from a Moroccan family. However, his parents sent him to dati (religious) school and, although according to most Ashkenazi definitions of the term he would not be considered a true-Chareidi as he served in the IDF and he works for the Israeli Police Force, he wears a black hat on Shabbos and sends his children to the school run by the Sephardi Chareidi school system. He has two sons, Guy and Eitan.

He began attending Shiurim a few years and as they say in Israel, he has been “Mitchazek” (strengthened) in his religious observance over the last few years. He has managed to arrange his work schedule that unless there is a matter of life and death, he never works on Shabbos.
About a month ago, the work assignments were given out for the month of May. Yotav was surprised as he noticed he was assigned to work in Meron on Shabbos May 17th. Yaacov received no such notice. When Yotav when to his superior he asked him why was assigned to work on that Shabbos?

His superior explained to him, “That although the chief rabbinate had suggested that due to the logistical necessities of accommodating 500,000 people who are expected to come to Meron on Lag B’Omer, that the bonfires be pushed off to Sunday (as is the practice in many Chassidic courts anyway) in order to avoid forcing many civil servants to work on Shabbos, their pleas fell on deaf ears and they answered, “None of ‘our’ people will be Mechalel Shabbos”, so the fires will go on and you must work on Shabbos.”
So, on Shabbos Parshas BeChukosai – Erev Lag B’Omer – while Yaacov sat comfortably with his family in Teveria enjoying Shabbos, Yotav was out in the hot sun setting up police barricades and other necessary activities to accommodate the ‘other’ 500,000 Jews who apparently felt their bonfires were more important than Yotav’s Shabbos.

When Yotav returned home after Shabbos, he was still unsure why if Chazal pushed off the blowing the Shofar on Shabbos in order to insure that no Jews would be Mechalel Shabbos, why did these people have to insist on having their fire at a time which forced him and thousands of other Jews to desecrate the holy Shabbos?

As someone once asked me, “If four sons who were Baalei Teshuva told their mother that they are coming to visit her on Motzei Shabbos and she replied, “That’s great! However, I will have to start cooking at three PM on Shabbos to prepare for you!”

Wouldn’t the children say, “That’s okay Ma; we will come on Sunday?”

That’s why Rabbi Eisenman is sad. While 500,000 are dancing, Yotav from Teveria is crying. Is that not a reason to be sad? Let’s make an effort to think of all of our brethren and help every Jew honor, respect and observe Shabbos!