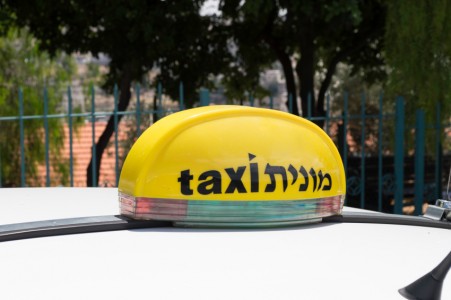 I can recall the cab ride many years ago. As I entered the cab in Yerushalayim almost a score of years ago, I was more than a little nervous. With all of the rhetoric and rancor about rabbis and Chareidim being tossed around in the media at that point in time, I was concerned that with my obvious Chareidi-rabbinic appearance that perhaps my secular-looking cab-driver would be less than appreciative of me. Therefore, when I entered the cab I attempted to be even more than friendly; I attempted to be outright sociable.

I inquired of his birthplace (Yokneam); I asked him what he did in the IDF (communications officer). And I even asked him the names of his children (Itai and Ido). However, despite my attempts at détente, Nehorai (I asked his name as I entered his taxi) remained reticent as his monosyllabic replies to my queries did not leave me filled with the warm and fuzzies.

However, I reasoned that he is tired and just wants to enjoy the quiet of the ride to Ramot and I was soon engrossed in the Parsha as I removed my Chumash from my pocket. I did not notice when we left the city proper and began the climb to Ramot as the words of Rashi kept me focused on my Sefer. Suddenly, as if I was being awakened from a dream, I heard Nehorai say, “Shum Davar Lo Yazor Lecha Achshav!” (Nothing can help you now). And as he finished his sentence he quickly opened the ‘secret’ compartment located between his seat and the front passenger seat.

I looked up from my Sefer and was unsure if I heard correctly. “Selicha?” (excuse me?) I muttered. As Nehorai continued to rummage through the storage compartment he repeated again the phrase, “Nothing can help you now”.

Was this really happening?

I looked out the window and as Nehorai sped along at 60 plus miles per hour, I knew I was not about to exit the cab at any time soon and indeed realized: “Nothing can help me now”. Finally after what seemed like an eternity, Nehorai began to pull some black cloth from the compartment.

“What could that be?” I wondered as my heart pounded so loud, it drowned out the sound of the Chadashot (hourly news) which were blasting on the car radio. Suddenly, just as I imagined the black cloth being used as a blindfold, Nehorai unfolded the cloth and gently and lovingly placed a black yarmulke on his head. He then turned around to face me as he continued his 60 plus mile per hour race to Ramot and with a wide smile stated proudly, “Nothing can help you now; all the rabbis who enter my cab are required to tell me a Dvar Torah and you will be no different! I sit in this cab all day thirsty for spirituality and silently praying that Hashem should send me a Talmid Chochom who can share some Torah with me in the car. When you entered the cab and I saw your frock and beard I was so excited. However, you kept on engaging me in small talk and I hoped you would eventually get the hint by my terse answers that I wanted to hear Torah. However, when you went to your sefer and left me alone, I had no choice but to state clearly and to the point: Nothing can help you now- I need a Dvar Torah and I need one now! I keep this Kippah in the car just for these precious moments; now please HaRav, please teach me Torah.”

There was no acrimony or hostility, no feeling of being taken advantage of, just a Jew who was desperate to bond to His creator.

As we drove on and discussed Torah, I realized once again just how united we all really are. However, as I think about that incident from 15 years ago, I wonder if today the situation would repeat itself.

Would the present Chareidi Rabbi who enters into a cab today attempt to be as a conciliatory and compassionate as so many of us attempted to be 15 years ago?

Has the current rhetoric, rancor and (I shudder as I write these words) constant comparison of secular (and even Kippah Sruga wearing) Jews to our arch-enemy Amalek, created a new emboldened and hate-filled Chareidi persona which perhaps openly and unabashedly avoids contact with the secular cab driver?

Has the constant portrayal of secular and non–Chareidi politicians (notwithstanding the Chareidi media consistently claiming they are the ones under attack) as ultimate epitomes of evil to the extent that one prominent Rosh Yeshiva from the most prominent yeshiva in Israel recently publicly stated that when he saw his five-year-old-son searching for a hammer to kill government ministers, he kissed his son on the head- caused your average Chareidi Rabbi to avoid contact with secular Jews?

This Rebbe proudly told his son that we should really (if the leadership would be backboned enough to give the order) be ready to take swords and kill off the JEWISH (emphasis my own) democratically elected officials. The Rebbe was very publicly proud of his son’s ability to be able creative and substitute a hammer in lieu of a sword. This type of Chinuch certainly does not bode well for that five year old boy and for our hope that the boy will soon be reaching out and be embracing of his fellow, albeit secular, Jew.

The Rebbe has since ‘clarified’ his position. However, once the cat is out of the bag….What does the current rabbinic-looking person think of the secular cab driver as he enters his cab?

For some reason (and I hope I am wrong), feelings of compassion, love of your fellow Jew and reaching out to each other somehow no longer come to mind as the correct answer. Perhaps at best, Rabbi Ploni enters the cab and minds his own business while the secular cab driver no longer thinks about removing his dishelmed and dust-filled Kippah and no longer asks to hear words of Torah.

Indeed, I wonder if when Nehorai cleaned his cab for Pesach, he found the long-unused relic of a religious yearning long squashed through the constant critical and often salacious portrayal of the members of the Zionist secular community by the religious media outlets. Perhaps as he picked up the old and not-recently used skullcap, he said to himself, “Why keep this in my cab? If they say I am Amalek and they believe I am Amalek, than I must be Amalek.” And with that, Nehorai took his Kippah and discarded it along with his faith and trust and even love of rabbis and of Torah.

After all, how can you love someone who tells his child to kill the person you voted for? How can you emulate the man who tells you that because your Yarmulke is different than his you are an Amaleiki?

And even when Nehorai attempts to question Rabbi Ploni he is answered with evasive and off the mark platitudes and with nonsensical ‘frum-babble’; the common denominator always being that the person who made the hate- filled invectives never meant what they said or those who listened were not of the intellectual capacity to understand what was said.

And therefore Nehorai takes his long-forgotten Kippah and discards it with his Chometz and that is a tragedy. However, perhaps even more tragic is the fact that when Rabbi Ploni enters Nehorai’s cab today and asks to go to Ramot, he makes no attempt to engage Nehorai; he makes no endeavor to connect and to bond; he takes out his Sefer and learns alone, and in solitude; never even considering that the person who sits just two feet from him is a warm and beloved Jew by G-d Himself; irrespective of the type of Yarmulke which he may or may not choose to wear and irrespective of whom he voted for. After all, do we not say every evening in our prayers: “Blessed are you Hashem, (who) loves His People Israel?”

We do not say: “He who loves those who wear a black or knitted or any sort of head covering.” We simply say “He who loves His people Israel.” And therefore tragically Nehorai no longer reaches out or yearns to hear the words of Torah from his Torah passenger. He sits also alone, engrossed in the Chadashot, listening to Jews from all sides of the aisles of the Knesset trade barbs and insults; each side never taking responsibility, each side equally blaming the other.

And as Rabbi Ploni learns his sefer alone and disconnected from Nehorai, and as Nehorai continues–for lack of being able to engage or being engaged by his passenger- to listen to the political posturing and put-downs which emanate equally from all sides being broadcast from his radio, Hashem looks down from the heaven and wonders, “When will anyone ever consider how I feel about this?”

And perhaps if we listen closely and open our hearts wide and unconditionally, we will hear the muffled cries of Hashem as He sees His people spiraling down faster and faster into the venom and enmity filled world of Sinas Chinam (baseless hatred). Friends, if we don’t stop our ever increasing outright hatred and abhorrence of each other, we may one day be forced to hear Hashem wondering aloud something even more chilling and terrifying.

We may one day be compelled to listen to He who loves all His Jews cry and lament: “Shum Davar Lo Yazor Lecha Achshav!” –“Nothing can help you now.” May that day never arrive.