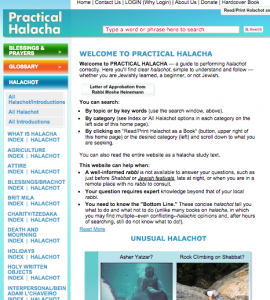 While there are sites on the internet for one to turn to and read an inspiring thought or interesting story, there aren’t as many that help both the scholar and layperson really “dig into” the world of Halacha.

To that end, we featured a blogpost called: Halachipedia: A New Resource for Researching Halacha. This site is one that continues to grow and expand since we featured it several months ago.

Recently, we were contacted by another site that is certain to be of service to rabbis, educators, congregants and students called: PracticalHalacha.com.

The site is both created and funded by Richard Aiken and is meant to help anyone perform halachos correctly. You can read more about the site and the many years of research that led to its creation by cicking here.

This new site explains questions such as: “What is Halacha?.” It also explores a plethora of topics that can be easily searched for as the site is organized and indexed by topic or keyword.

All of the halachos have been reviewed by Rabbi Moshe Heinemann, who heads the Agudath Israel of Baltimore and is the rabbinical supervisor of the Star-K. As the site is relatively new, PracticalHalacha.com is looking for feedback from rabbis and educators.

Likewise, if you have congregants or students who speak other languages and you believe that they would benefit from a site like this, please contact PracticalHalacha.com here and let them know–since they plan to translate all of their content into five or six languages in the near future.