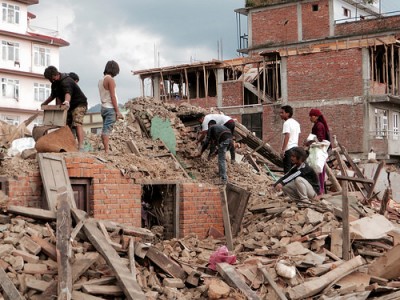 As I glanced at the news this morning, I could not help but feel pain and sympathy for the survivors of the massive earthquake which racked Nepal on Shabbos. As of this writing, there have been over 4,000 confirmed deaths and that number may rise in the coming days. The devastation and the loss of life are painful to view; however, as I read the article on the tragedy, one sentence really touched me.

“KATMANDU, Nepal — Residents of Katmandu living in tent camps after Nepal’s powerful earthquake said on Tuesday that their biggest worry was a lack of safe drinking water…”

I reread the words…

“Their biggest worry was a lack of safe drinking water.”

As I was reading these words, I grasped the irony of the situation; simultaneously, I was mechanically sipping a glass of bottled water at my desk!

I cannot deny that I am not at a level where I can claim that I feel the pain of those suffering in Nepal; however, at least I can attempt to appreciate what I do have.

Perspective; it makes all the difference in the world.

We live in a world where we have unlimited supply of fresh and clean drinking water. Thankfully, we cannot even imagine a day without water. But, who says that’s how it has to be?

Thousands of people went to sleep Friday night in Nepal with the assumption that the sun would rise and they would have plenty of drinking water as they had on Friday and on Thursday. Alas, this was not the case, and instead of worrying if they should have milchigs or fleishigs for dinner, they are now worrying if they will have water to drink tomorrow. Think about that for a moment; perhaps it can help us place life in perspective and allow us to have appreciation for the “simple” things in life – especially for water. Think about your family and about the 4,000 people who are no longer with their loved ones in Nepal.

Think about the tens of thousands of people who are sleeping outdoors for fear of aftershocks.

Think about that when you stretch out in your bed tonight and for a second, (just for a second) put your life in perspective.

Are most of the things I complained about today really as serious as I thought they were?
Did it really matter that my Keurig coffeemaker is beginning to “short change” me when I ask for an eight ounce cup of coffee? Does it really matter that the cleaners did not get out the stain from Pesach as I hoped they would?

I must think about Nepal and be appreciative for what I have and I must realize that hundreds of thousands of people in Nepal would be overwhelmed with happiness to have what I have.

Thank you Hashem for my water.