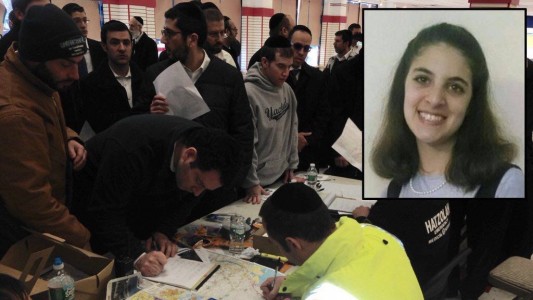 Last Shabbos was a most unusual one for my entire community of Passaic, NJ, my family, and for me.  On Friday morning we had been emailed that a young woman from our community, Devorah Stubin, had been missing since the previous evening. No information was given at that time in terms of how we could be helpful, other than some basics about her disappearance and to offer tefillos on her behalf. Then, on Shabbos morning, the early minyan that I attended was interrupted by requests for volunteers.

We were asked to drive out to the nearby town of Maywood to join in a search for Devorah. Tens of people responded, including my son and me. People from other shuls were similarly recruited. Upon arriving at a converted warehouse turned command center, we were given the first of what would be multiple nearby areas to walk by foot, looking for any signs that would give us a clue as to Devorah’s whereabouts.

This process was repeated for hours, as tens of additional people (if not more) from Passaic, neighboring Clifton, and throughout the area (including Monsey, Bergen County, and Brooklyn) – people of all stripes and shul affiliations – joined in the search. Leading the effort was a team of exceptional volunteers from Hatzoloh, Chaveirim, etc., who forewent food, sleep and any semblance of a regular Shabbos in order to help. One of them did so despite the fact that he was making a chasuna for a child in just a few days be”H. He sacrificed a special Shabbos with family and friends in order to help in this vital cause.

Unfortunately, the herculean effort of so many failed to achieve the desired result. We would not be able to bring Devorah a”h back. In fact, her fate had already been sealed two days earlier when she had lost control of her vehicle and tumbled into a nearby river. We were at least able to bring closure to a most tragic episode, in terms of identifying Devorah’s fate and whereabouts.

I had never spent a Shabbos like that and hope that I will never have reason to again. It felt quite strange to voluntarily leave shul and get into my car at 8:30 on a Shabbos morning. I had never driven before on Shabbos, even when my oldest child was born on that day. There was no Shabbos feel as I made my way through unfamiliar terrain with the help of my GPS; nor did it feel comfortable for me to use my phone as I communicated throughout the search or carry paper and a pen outside of an eruv in order to notate findings, text in pictures of surveillance cameras, and ask nearby residents for information. But in this situation, feelings of normalcy, comfort or routine were irrelevant. The only thing that mattered was Devorah’s safe return.

Prior to this incident, I had never met Devorah. I first learned of her existence with the arrival of that alarming email. But that fact mattered neither to me nor to the scores of others who also shared no personal connection with her. What mattered to everyone that assembled on a wet, cold Shabbos morning was that someone in Klal Yisrael, and specifically in our community, needed our help. We all committed on a moment’s notice do everything humanly possible to provide it.

We sing in Zmiros on Shabbos that the day is Ma’ain Olam Haba, a resemblance of the Next World. While there are many explanations for this comparison, I would like to suggest one that connects to our surreal Shabbos experience. In Olam Haba there is no physical reality or physical pleasure. It is not necessary or useful, as the entire experience is about reconnecting with our Maker and enjoying a special spiritual proximity with Him. While this may not be true about every Shabbos, this past one reinforced for me the importance of forgoing our fleeting pleasures and comfortable surroundings as needed in order to fulfill our true mission of connecting with Hashem and the creations that he loves so deeply.

In the command center, evidence that it was Shabbos could be found only if you really looked around. A few challah rolls over here, some grape juice over there. But there, amongst all of the hustle and anxiousness to get out to the road and find Devorah, one could sense a deep feeling of community among those who came together from nearby and beyond in a complete act of mesiras nefesh, to find and care for one of our own.

Passaic / Clifton, while not geographically large, is a “big” community, ba”h, in terms of the number of families, shuls, schools and the like that call it home. While it is in many ways tight-knit, it is also easy to live in this town and not know people who live close by, let alone on the other side of town. I am sure that similar dynamics exist in many communities throughout the greater NYC area and beyond.

But on this Shabbos everyone from around town really came together. While we quickly fanned out with partners to search our designated areas, our few minutes of together-time waiting for instructions in the command center gave us all a deep, unifying sense of connection and belonging. And from the little that I know about Devorah a”h, I would say that what I have heard about her friendliness, good cheer and general concern for others (she had been out to pick up a sibling the evening that she went missing), were definitely a unifying force and an unspoken source of inspiration for all of us throughout the experience, as was the fact that her family gives constantly and without fanfare to their shul and community.

Lest you not take my word for it, this sense of unity and cohesion was sensed deeply by the media and others involved as well. Numerous reports depicted with great admiration the many “Orthodox Jews” from her “tight-knit” community coming together to help.  It was, without question, an incredible Kiddush Hashem.  Imagine how much greater the Kiddush Hashem is and will continue to become if Devorah’s tragic saga continues to bring us together and selflessly support one another.

May we all find comfort in the beautiful life that Devorah a”h lived and in the love and self-sacrifice that our greater community demonstrated at a time of great need. And may this sense of communal bonding inspire us to find additional ways to support and connect with one another so as to be a source of continued merit for Devorah a”h, and a source of nechama for her devoted, loving family.

Rabbi Naphtali Hoff, a Passaic resident, is President of Impactful Coaching & Consulting. He can be reached at 212.470.6139 or at nhoff@impactfulcoaching.com.