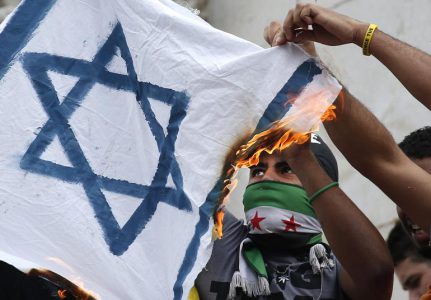 After the Jewish people received the Torah at Mount Sinai, and later stumbled from the sin of the meraglim (spies), they were punished by God to remain in the desert for forty years before entering the Land of Israel. During that time, they defeated the belligerent Amorite nation which triggered concern among neighboring Moab and Midian. Fearful of further Jewish conquest and aware that the Jews’ strength lies in their spiritual connection to God, the Moabite and Midianite nations enlisted the services of the greatest non-Jewish prophet, Bilaam, to curse the Jews. An entire section of the Torah, Parshas Balak, recounts the repeated attempts by Bilaam to curse the Jewish people.

Balak son of Zippor (King of Moab) saw all that Israel had done to the Amorite. Moab became very frightened of the [Jewish] people, because they were numerous, and Moab was disgusted in the face of the Children of Israel… He sent messengers to Bilaam son of Beor to Pethor, which is by the River of the land of the members of his people, to summon him, saying, “Behold! A nation has come out of Egypt; behold, it has covered the surface of the earth and it sits opposite me. So now, curse this people for me… Bamidbar (Numbers) 22:2-3, 5-6.

God does not allow Bilaam to curse the Jewish nation and in fact he bestows upon them blessings! Moreover, Bilaam prophecies the very secret of Jewish survival.

Behold it is a  nation that dwells in solitude…Who has counted the dust of Yaakov (Jacob) or numbered a fraction of the Israel?  (Bamidbar 23:9-10)

Rabbi Moshe Meiselman in his essay on the root causes and antidotes to anti-Semitism based on the Netziv, The Remnant of Israel, in his journal Oraissa, (pg. 39) establishes a general rule: If the Jews do not separate themselves to fulfill their unique task, they will be separated in far harsher ways:

“…The Talmud (Sanhedrin 104a) tells us that the desolation of the Jewish people is always due to their refusal to remain separate.

איכה ישבה בדד (Eicha/Lamentations: 1:1) ‘Rabbah in the name of Rav Yochanan said, “I, God, said that Israel should dwell securely according to the vision of Jacob.” Now that they have rejected this, let the city dwell desolate.’

“The above Talmudic statement informs us that as a consequence of their rejection of this mission, the nations of the world have forced them to dwell apart. In this way Israel is saved from herself.

“This is also the content of Bilaam’s prophecy: they are a nation, that when alone, dwell securely, but when they try to be accepted by the nations of the world – on those nations’ terms, will never be respected. Israel is respected by the world only as the bearer of a moral message and mission. When that is rejected, and to the degree that it is, Israel brings upon herself the contempt of the nations around her.

“God has endowed various aspects of creation with distinct purposes and goals. The rejection of a national or personal mission is viewed in the most serious terms. Divine retribution is the means by which God guarantees that the ultimate purpose of creation be attained, as was seen during widespread moral breakdown, such as: the flood in the times of Noah, the generation of the tower of Babel, and the destruction of Sodom and Gomorrah.

“Just as this principle applies to the realm of general human society, so too is it valid vis-a-vis the special mission of the Jewish people. Their Divine election, dating from the Revelation at Sinai, gave the Jewish people the capacity and obligation to correct humanity and to teach and demonstrate to it the nature of human perfection – belief in one God and proper behavior. Isaiah described this mission in the verse, ‘I have formed you with a unique nature and made a covenant with you so that you will be a light to the nations of the world.’ As long as we continue to fulfill our national purpose, God will protect and reward us, thereby helping us to fulfill that very purpose.”

The Netziv writes that Bilaam himself conceded he aspired to live like the upright forefathers, revealing that his motivation to curse the Jewish people was due to jealousy:

“The first Book of the Torah is called Bereishit – Genesis. It is also referred to by the Prophets as the Book of the Upright as discussed in the Talmud (Avodah Zarah 25a): ‘Rabbi Yochanan explained this is the book of Avraham, Yitzchak, and Yaakov who are called upright (moral/principled), [as Bilaam the prophet said (Bamidbar 23:10)], “If I would only die the death of the upright…!”’ Bilaam prayed for himself that his destiny would be like the forefathers… (Netziv, Introduction to Sefer Bereishit)

Bilaam is one archetype of anti-Semtism in the Torah.

There are three Morasha shiurim addressing the phenomenon of anti-Semitism: