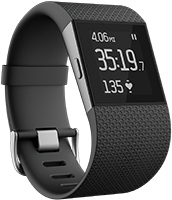 “Rabbi, what is that on your wrist?”

“It tracks how many steps I take each day, the quantity and quality of my sleep, and other important pieces of information.”

“C’mon Rabbi, sounds like shtick to me.  Do you really need that?  What does it do for you?  You already know you should be active each day and that you need to get enough sleep, so just do what you are supposed to, why do you need to wear something?”

I thought about his question and it struck me as compelling.  We know what we need to do in life, so why not just do it?  Why involve outside “shtick?”  Isn’t it just a distraction?

And then I remembered an excellent quote from the great management expert Peter Drucker: “What gets measured gets managed.”

“The value of wearing a Fitbit,” I told my friend, “is that it holds me accountable to achieve my commitment and forces me to confront the reality of falling short, rather than at the end of each day bluffing or fooling myself about what had in fact transpired that day.”

Across the world from Professor Peter Drucker lived another management expert, only he specialized in personal management. Rav Kalonymus Kalman Shapira, Hy”d, also known as the Piaseczno Rebbe, was a Chassidic Rebbe in Poland who served as the rabbi of the Warsaw Ghetto and, after surviving the uprising, was later shot dead by the Nazis in the Trawniki labor camp. Among his many talents, he had incredible insight into human psychology.

In his spiritual diary called Tzav V’Ziruz he writes the following entry (#15):

If you have been able to draw up personal rules for your spiritual growth, consider this a success.  But if you have not, then either you have not devoted your life to personal growth or you are blind to your own failures and successes.

Because the spiritual seeker who channels his efforts to his inner world will inevitably be faced with difficulty and distraction – not only external ones like supporting his family but also in his inner world such as indolence, negative tendencies, destructive character traits, and so forth – and because the spiritual seeker is constantly involved in this inner battle, sometimes winning and sometimes losing, he will inevitably come to conclusions: which strategies work for him and which ones bring out his weakness.

So someone who cannot draw such conclusions is not engaged in the battle – he neither wins nor loses.  Or else, he is unaware of both his inner weaknesses and strong points.  (Translation from Yehoshua Starret.)

Essentially, the Piaseczno Rebbe says that when it comes to our character, our personal growth and becoming the best version of ourselves – what gets measured, gets managed.  One cannot claim to care about growing spiritually and fail to devise a plan or a strategy, set goals, and, most importantly, identify how progress will be measured.

It is one thing to say you want to work on having greater patience and being slower to anger and another to articulate a plan for “how.”  Does the plan answer questions such as: What triggers your anger? Why do you lose patience?  How will you learn to react differently?  How will you measure and track if you are improving in this area?

It is one thing to say you want to work on improving your davening and another to design a strategy to actually grow in your prayer experiences.  Have you considered what is your biggest challenge connecting in prayer?  When has prayer uplifted you in the past and what elements contributed to that positive experience and result?  How will you improve?  Will you read a book on prayer?  Listen to classes on prayer? What are the metrics you will use to measure your growth in davening?

The difference between a desire to grow being just lip service and empty words versus the beginning of real change is designing our personalized Spiritual Fitbit – a Spiritbit.

Here are a few things to consider when programming your Spiritbit:

Get more sleep, lose weight, have less anger, stop feeling jealous, improve davening, be more scrupulous in following Jewish law, set aside time daily for Torah study – whatever the area you want to work on, this can absolutely be your year.

But it won’t happen if you don’t design a Spiritbit, a mechanism to be honest and to track results.  Wear your Spiritbit and finally become the best version of yourself.