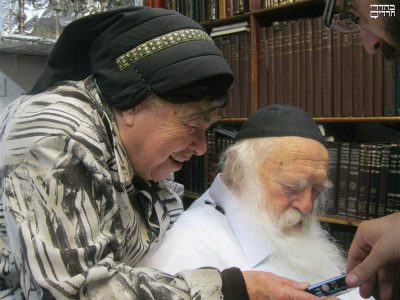 In the Chareidi Jewish world, there are too few women “Gedolos” (larger than life individuals). The reason is obvious since a woman is generally in the background in accordance with the verse in Tehillim (45:14), “All honor [awaits] the King’s daughter who is within.” Therefore, most great Jewish women are private individuals whose greatness is seen by very few outside the immediate family.

One woman who was successful in navigating the delicate balance between being a public figure while maintaining her greatness in modesty was Rabbanit Batsheva Kanievsky A”H, whose fifth Yahrtzeit is today. The Rabbanit – as she was known by all – was an individual who dispensed love and advice to everyone who approached her. She was indeed a remarkable individual and a true role-model for thousands of Jewish women all over the world. Her ability to connect with everyone, irrespective of their religious standing or even their dress is legendary. She was the public face of the Kanievsky home, always with a smile and always ready to comfort and help another human being.

As I have been visiting the Kanievsky household for almost thirty years I had the fortunate merit to speak with her on many occasions. She was there to give candy when I brought my grandson for his upsherin with Rav Chaim and she was there for my daughters when I brought them to see her. Perhaps though, my most poignant memory of the Rabbanit and Rav Chaim occurred about 15 years ago. It was an unusually cold and rainy winter day in Bnei Brak. I arrived at the home in the late evening and at that time – the Kanievsky home, although it was frequented by many – was not yet the focal point of everyone’s trip to Israel as it is now and access was more forthcoming.

I entered their home and R’ Aryeh – their grandson who I know quite well – was the only one with them. As he knew me and realized I would not waste their time with trivialities, he encouraged me to enter their ‘dining room.’ I began to enter the room and I froze in my tracks. I shall never forget the sight which greeted me. On one chair sat Rav Chaim; a little hunched over and wearing a much worn and seemingly misbuttoned old blue sweater which had seen better days decades ago. Across from him sat the Rabbanit; in front of her lay a stack of paper of various sizes and shapes. It quickly became clear to me that these papers were the written requests for Brochus which she had amassed during the day. As she sat opposite her saintly husband she began to read – with intense seriousness and emotion – each and every one of these tear stained petitions.

I became invisible as I stood there mesmerized watching an obvious daily ritual which played out before my eyes. As I stood there in rapt attention I began to realize that I watching something else; something great and rarely witnessed. I was an onlooker to a time of intense personal and intimate closeness and love between husband and wife. This was not just a wife mechanically reading petitioner’s requests to her holy husband; no, I was witnessing an act of closeness and warmth between a husband and a wife.

This was not a daily chore which was part of the pedestrian particulars of their daily routine; this was a living example of a tender and warm attachment of the Rabbanit and Rav Chaim. At that moment their greatness was manifested not in their being world-famous Tzadikim; quite the opposite, their greatness manifested itself in their utter human simplicity; a husband and wife sharing a tender and cherished moment together.

This was the stuff of which memories are made. As I stood there I knew I was bearing witnesses to the true reason of the greatness of both Rav Chaim and the Rabbanit…. That moment remains etched in my heart forever. May her memory be a Brocha and an inspiration for all of us.