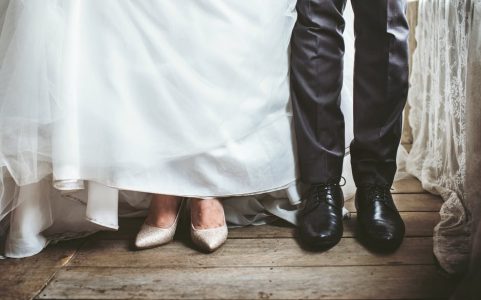 It was very early on in my rabbinical career when I learned the important lesson: “Not all that glitters is gold.” Too often those families, who at first glance would be perfect to adorn the cover of “Mishpacha Magazine” were in reality the most dysfunctional. When I first began dealing with Shalom Bayis issues I still believed with a sense of naiveté that all marriages are salvageable and blissfulness could always be restored. Often quoted passages from our Sages which are applicable perhaps to a majority of marriages, motivated me to believe (incorrectly) that all marriages were somehow redeemable.

I was under the misguided assumption that the word “Get” was not a part of our “frum lexicon.”

Goldy and Laibel (names changed) were the first – and unfortunately not the last couple – who rid me of my innocence and propelled me into reality.

They were married for 17 years, had four children, yet, they never had one day of true serenity in their marriage. They actually did not even daven by me regularly. This is also a common tactic of those living in the world of denial – never reveal your real problems to the rabbi who will be called to vouch for your family for Shidduchim. Always go first to the ‘other’ rabbi, the one who no one knows you have any connection with.

When they first came to me I insisted they see a competent marriage counselor. I am adamant that in matters which require professional intervention, the issue should be handled by trained and licensed experts. After a year of therapy the situation continued to deteriorate. Despite my heartfelt desire for them to reconcile, it was obvious that their marriage was imploding. The home was saturated with stress and laden with anxiety which caused all – especially the children – to be constantly walking on eggshells. The children described their home as place of constant worry and apprehension revolving around what or what not to say. Each child tiptoed around the house never knowing if they should say ‘this’ to Mommy as that might make Abba mad; and to make sure not tell Abba ‘that’ as ‘that’ would cause Mommy to ‘lose it’.

The children trained themselves to live lives of duplicity. At school or with friends they were quick to maintain the illusion that their home was like any other home with a functional mother and a loving father. In reality when they were home they were forced to suppress their feelings and emotions for fear of setting off another major conflict in their already stressful environment. The children learned early on in life that certain aspects of their lives must be kept hidden and tucked away from one or both of their parents, for disclosure would always lead to unmitigated pain and anxiety. In reality, the children were the greatest victims of the dysfunction and the tension which saturated their home.

Shabbos was always the day they dreaded the most, for at least during the week, their father went to work and their mother did her work and chores. Shabbos was horrible. The Shabbos table was not laden with chulent and kugel; it was fraught with repressed anger, frustration and rage. More often than not, the repressed fury would explode with the ferocity of a detonated grenade with the shrapnel scattering and emotionally wounding and injuring everyone at the table.

Goldy was miserable, she had no soul-mate with whom to share her life and Laibel was equally unhappy as he never emotionally connected with Goldy. I realized that the situation was worsening, so I suggested a trial separation. After three months we met again. Surprisingly both of them admitted that they felt more at ease and calm not living under the same roof.

Finally, it was agreed that a Get was the best solution to their predicament. The only sticking point which they expressed was, “We have a 17 year old daughter who is entering shidduchim, what chance does she have coming from a broken home?” I looked at them with empathy and love as I answered, “And what chance does she have coming from a dysfunctional home?” The Get took place a month later. Exactly two years later their daughter Leah became a kallah. I was honored to officiate at her chasunah.

As we danced the couple into the yichud room, Leah asked me to close the door. She turned to me and said, “Rabbi, thank you. There is no way I could have ever reached this day if I would have remained in that house living together with my father and mother. I love them both, however, the best advice anyone ever gave them in their eighteen years of marriage was to stop trying to fix that which was permanently broken.

“Our house was not a home; I lived in constant fear of saying the wrong thing. The feeling of stress and anxiety was palpable. Once they divorced each one of them felt liberated and they were able to express to me their unconditional love and I was able to do the same in return. There was no longer the dread of saying the wrong thing at the wrong time. After the Get, I was able to be me and that freedom allowed me to establish real and stable relationships with each of them in an emotionally healthy environment.

If not for the Get, I would still be living under a cloud of strain and anxiety. It was the Get which emancipated me from the psychological paralysis panic precipitates. The Get should have happened years ago; thank you for salvaging the remnants of my life.”

Tearfully I said, “Leah, when you married, you – as all new couples – rebuilt one of the destroyed homes of Yerushalayim. However, this time there was a need to first dismantle a dysfunctional home. On top of those ruins you and your new husband have the ability to build a true and everlasting Jewish home. May Hashem support you in your endeavors and never forget to remember the pain you experienced as this will help to remind you how ‘not’ to react to the pressures of marriage. Mazel Tov!”