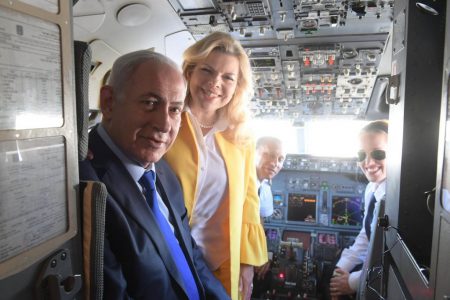 I cannot even count how many people forwarded me this article which has been widely disseminated:

Nechama Spiegel Novak, a mother of four who has been flying for the national carrier since earlier this year, left Ben Gurion International Airport on Wednesday morning guiding a chartered Boeing 737 to Thessaloniki, where Netanyahu is participating in a trilateral summit with Greece and Cyprus.

Novak attended flight school in the United States, where she worked to log enough flight hours. Unlike most Israeli pilots, she did not serve in the Israeli Air Force, where most pilots log their flight hours and get their licenses.

“Being a pilot has always been a dream of mine. My husband is very supportive, and he is helping realize this dream,” she said in 2015 when she started her flight training.

Novak lives in a Hareidi neighborhood of Jerusalem and is reluctant to grant interviews. (JTA, June 14, 2017)

As I read the article, there was one question which kept gnawing at me.

That question is, “What qualifications are necessary to be categorized as Hareidi?”

This article is not per se about Ms. Nechama Spiegel Novak.

I don’t know her and only wish her the greatest success in her career.

She is one of those blessed individuals who has (as she herself writes) “realized her dream” by being a pilot. I am very supportive of her achievement and applaud her accomplishment and she is indeed an inspiration to all, men and women alike. With that disclaimer, let us proceed on our quest to establish categorically, “What is a Hareidi?”

One person who seems to be unequivocally categorized as being Hareidi is Ms. Spiegel Novak.

The media and indeed even the Prime Minister of Israel have declared Ms. Spiegel Novak as being Hareidi.

Prime Minister Netanyahu tweeted: “We are now going to meet with the first Hareidi woman pilot. You are invited to join. She is the first, but not the last.” (Emphasis added by me)

Yet, why is she deemed Hareidi?

A quick look at ‘R’ Wikipedia’ reveals the following definition: “Hareidi Judaism is a broad spectrum of groups within Orthodox Judaism, all characterized by a rejection of modern secular culture.” (Emphasis added by me)

I think we can state emphatically that if a “rejection of modern secular culture” is a prerequisite for being a ‘card-carrying’ Hareidi, Ms. Spiegel Novak certainly would not qualify.

‘R’ Wikipedia’ continues: “In contrast to Modern Orthodox Judaism, which hastened to embrace modernity, the approach of the Chareidim was to maintain a steadfast adherence both to Jewish Law and custom by segregating themselves from modern society.” (Emphasis added by me)

Here too, if this is to be taken as ‘fact’, then Ms. Spiegel Novak would not make the grade.

After all, she certainly has not “segregated herself from modern society.”

So again we ask, “What makes one a Hareidi?”

As I mentioned, I am totally supportive of Ms. Spiegel Novak and wish her all the best.

I am just wondering what makes me or you or anyone else Hareidi?

What makes one Modern Orthodox?

What makes one Chassidish?

Do we really need these categories?

Are they really helpful for our spiritual development?