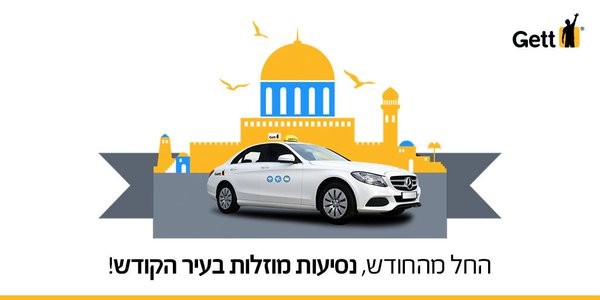 It was Friday, early afternoon. I was returning from the Kosel after Mincha. I was very tired as I looked for a cab to drive me back to “town.” I approached a taxi and sat down in the back seat of the cab, glad to rest. I quickly allowed my mind to roam aimlessly as I enjoyed the view of the holiest city in the world. I watched in amazement as the taxi circled around the ancient walls of the city and as we flew passed the Jaffa Gate.

I was totally memorized by the sights of Yerushalayim on Erev Shabbos and I was not even aware that the taxi driver had begun to talk to me. Suddenly, as if awakened from a dream, I realized that the driver was speaking to me in rapid fire Hebrew. I could not catch every word and I was unsure if it was because of a strong Sephardic accent or perhaps he was an Arab and his Hebrew was more Arabic than Sephardic!

I began to focus on his words and finally I clearly heard what he was saying; “Af Eched Lo Yachol La’azor Licha Achshav…” Did I hear correctly? Was he really saying what I heard him say? He repeated his statement a second time: “No one can help you now!” A sickening feeling went through my entire body and I began to sweat. Why didn’t I check who the driver was before I entered the vehicle? How silly could I be? Here I was with my big beard, big hat, big black coat and being told by the cab driver: “No one can help you now!”

He again repeated the statement; however, this time he opened the small compartment between the two front seats and rummaged around for something. I checked the door and contemplated bolting from the fast moving vehicle. However, he seemed to be accelerating at every turn and there was no way I could be sure I would survive the fall. Suddenly, he found what he was searching for in the compartment. I could see that it was black and he began to remove it from its cubicle. I wondered if I should say Shema now or wait until there was no hope.

I had just arrived in Eretz Yisroel the night before and now, less than 24 hours later, I had placed myself in a life-threatening situation with no way out. I attempted to review the second chapter on Bitachon from the Chazon Ish’s classic sefer, Emunah U’Bitachon; however, it was difficult to concentrate. Finally the driver announced again, “I told you no one can help you now!” And with that I noticed how he unfolded the black cloth and placed it squarely on his head – it was a black Yarmulke! He then repeated his mantra of, “No one can help you now”; however, this time he added, “Every Rabbi who enters my cab is required to tell me a D’var Torah. Nothing or no one can help you get out of this requirement. I have taken the biggest rabbis from all over and all of them must tell me a D’var Torah when they enter my cab. You look like a rabbi so no excuse will help you. I require you to tell me a Torah idea.”

My heart missed a beat as it went from utter despair and hopelessness to a feeling of relief and of reprieve. I was trembling as I was completely transformed from dismal gloom to complete joy and simcha. The driver looked at me in his rearview mirror as he nudged me by saying, “Nu, what’s the Torah thought you have?” Through quivering lips and teary eyes all I could manage to say was, “Hodu L’Hashem Ki Tov, Ki L’Olam Chasdo.”