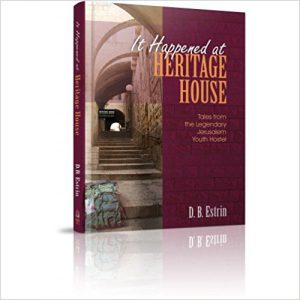 When I was asked to come work in kiruv at the Heritage House in the Old City of Jerusalem in 1986, I balked. The chance to offer an authentic Torah experience to those with limited Jewish backgrounds sounded like meaningful and inspirational work. But just as quickly as that image took form, a tide of doubt and fear washed the scene away like a sandcastle dissolving back

into a smooth stretch of beach. Wait — someone who has never encountered authentic Judaism before will walk through this door, spend a night or two, and whether she pursues Torah or

passes it by will depend on my efforts? That seemed too heavy a responsibility. The stakes were too high, especially on a nightly basis.

The next day, I take my dilemma to Rabbi Liff, the head of the beginner’s program at Neve. He waves off my concerns. “Don’t worry, it’s not up to you. It’s all ‘zechus Avos’ — whether or not a person decides to return to Torah depends on the merit of her ancestors that the person carries with her when she walks through the door.”

In other words, whether or not they’ll embrace Torah depends more on the kind of pull they have Upstairs than any conversation I might have with them downstairs in the hostel kitchen.

And so I took it on.

It turned out to be a wild ride, with many life lessons and kiruv lessons learned along the way. Many times we realize only later how our own journey is intimately intertwined with the journeys of those we encounter.

I knew one day I would have to write about it. Which is why I started to keep a daily journal that eventually became the book, It Happened at the Heritage House: Tales from the Legendary Jewish Youth Hostel. Besides being an entertaining read for the general public, the book is particularly useful for Jewish educators and mekarvim. The stories address issues such as Eastern thought and other religions, challenges of mental health and addictions, being both nonjudgmental and an attentive listener, feminism, intermarriage and answers to some of the most common questions. But I also hope that the stories themselves, that champion mekarvim who are dedicated to bringing Torah into others’ lives, will inspire their continued and persistent effort when they see how baalei teshuvah and their descendants are transformed forever!

From the east I will bring your seed, and from the west I will gather you in. I will say to the north, “Give up,” and to the south, “Do not hold back. Bring My sons from afar and My daughters from the ends of the earth.” (Yeshayahu 43:5–6)

An excerpt from the book follows…

FASHION FOR THE FRENCH

“The French are coming!” someone downstairs yells. I’m on the third floor, getting yet another lesson from Gila Manolson, the housemother, who lives with her small family on the middle floor, on how to operate the Shabbos clocks. (Even now I tend to group the world into two categories: the type who can operate Shabbos clocks and those who can’t.)

It’s summer and groups are arriving in waves. This particular breaker has crashed on our front door twenty minutes before sundown Friday night. Some groups come knowing that showing up at the hostel on Friday means they’ll be set up with a host family and experience an authentic Shabbos, and some show up unaware. This group seems to be of the latter sort.

After a quick rundown of Shabbos at the Heritage House, I hastily explain the modest attire issue. Outfitting any group on such short order is daunting — but French! Will they stomp off indignantly at the suggestion that they select something from the “tznius closet” to wear to their hosts’ home for the Shabbos meal? I worry as I lead them upstairs, joking about the haute couture they’re sure to find. But it turns out I have nothing to worry about. Good-naturedly they hold up, try on, and exchange long-sleeved tops and below-the-knee skirts until each one settles on her new “look.”

We make our way down to the others — about thirty in all — to light the candles that have been set out for each guest. The glow of the flames highlight the beauty of the arched stone windows. Everyone finds a seat, either on one of the bunk beds or on the couches that line the sunken living room. An anticipatory hush seems to emerge from the flames themselves. It’s as if we’ve entered a space between what they have known all their life and what they’re about to experience — the dancing flames like flags at the entrance of some new kingdom. I decide to share a thought about candle lighting before we make our way down to the Kosel for meal placements.

“Notice how one flame can transfer to another wick — even a thousand other wicks — and the first wick is not diminished…” And so follows a short discussion on the nature of the spiritual versus the material and how Shabbos is a focus on the spiritual. Shabbos, I point out, is the seventh day of the week, and we talk about the significance of seven. Seven is the number of colors in a rainbow. It is the number of notes that make up a diatonic scale. The natural world is built on the number seven. Seven also represents the center point, the inner dimension, of the six-sided cube, which depicts the physical world’s dimensions. So too, the seventh day — Shabbos — is the central point that gives meaning to the other six days of the week.

I go on to point out how a typical “Saturday” can mean this one running off to play tennis, that one watching television, each member of a family “doing his thing,” while Shabbos is about spending the day with family for a shared spiritual encounter. Before we head out, we spend a few more minutes having everyone introduce herself and then walk down to the Kosel to meet Rabbi Meir Schuster for Shabbos placements. Flanked on either side by this international entourage, I think, I had better maintain my center as I encounter all sides of the “cube.”

Dena B. Estrin is the author of It Happened at the Heritage House: Tales from the Legendary Jewish Youth Hostel… True adventures in the Old City of Jerusalem. Dena can be reached at estrindb@gmail.com, Tel. (+9722)-586-9095.

Another important book for the Jewish educator’s library by the author is: