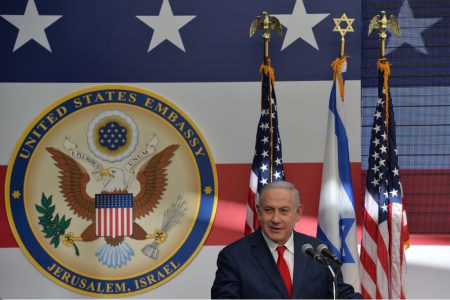 One of the basic tenets of those who have opposed the State of Israel has been that the State violates the “Three Oaths” as found in the Talmud in Masechta Kesuvos 111.

Based on the above, the argument was advanced that Israel’s declaration of Yerushalayim as its capital violated the second of the oaths, namely, “Israel was not to rebel against the nations of the world.”

Since no country recognized Israel’s right to Yerushalayim, we were violating the oath as we were “rebelling” against the “nations of the world.”

The recognition of the status of Yerushalayim by the strongest nation of the world was achieved today through the formal consecration and elevation of the former consulate in Yerushalayim to the status of the official Embassy of the United States of America. As of today, the greatest and most powerful nation in the world formally and publically proclaims: “Yerushalayim is rightfully the capital of the Jewish State of Israel.”

We have davened for three thousand years for not only to be able to return to Zion; but, also for the fulfillment of the prophecy of Tzephania:

“On that day it shall be said to Jerusalem, ‘Have no fear! O Zion, let your hands not be slack.’

Let us rejoice together with Hashem, as the prophet says, “Have no fear! O Zion, let your hands not be slack.” As Hashem is “jubilating” over Yerushalayim “with song,” we must emulate His happiness and join Him in song and jubilation on this historic day.

May we be privileged to see the consecration of the Third Beis HaMikdash swiftly and in our days!