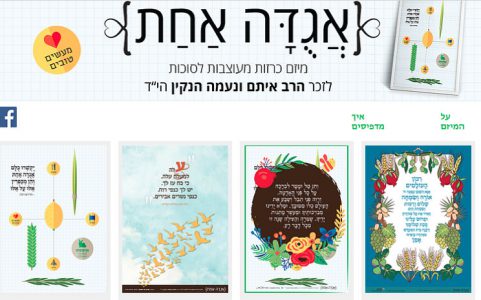 An important and meaningful initiative was launched in memory of Rabbi Eitam and Mrs. Naama Henkin z”l who were murdered by Palestinian terrorists in a drive-by shooting near Shechem last year on Sukkot, October 1, 2015.  Their four children aged 9, 7, 4 and 4 months were in the car and survived.

Rabbi Henkin had recently completed his second book on Jewish law related to the Sabbath and was a prolific writer of Jewish history and Jewish law. Mrs. Henkin was an accomplished graphic designer.

Her friends have designed stunning Sukkah posters in Hebrew in the Henkin’s memory that can be downloaded and printed for free. In fact, some of the posters were made by Mrs. Henkin.