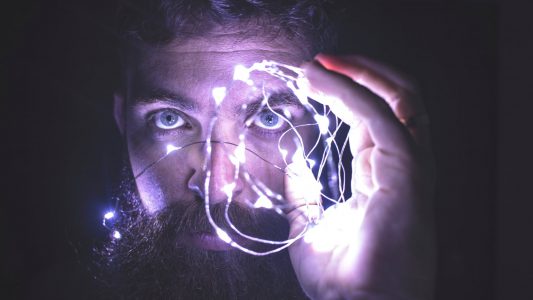 In talking about cognition you need to talk about epistemology, the branch of philosophy that deals with knowledge: how do you know what you know?  We talked about the scale of cognition as ranging from skepticism on the left hand end of the scale, which posits you can know nothing for certain, to the right side of the scale which will be infallible knowledge. Smack in the middle will be fallibilism, the idea that knowledge is necessarily imperfect but that it’s possible to act anyway. Please note that knowledge must necessarily be imperfect because we’re derivative beings and not omniscient. If we could actually be omniscient, even in one fact, we’d be G-d — that would be an invasion of the idea of infinity and, hence, impossible.

For example, when we name a giraffe we can never name it from G-d’s point of view because we are not G-d but, rather, only from our necessarily subjective own. This is a theological cost for being derivative beings, that is to say, finite and not infinite. And since this is a world of doing where one has needs that need to be fulfilled by belief, choice, and action, in that order, it is imperative that one not lapse into skepticism as a philosophical stance. For as a stance, skepticism leads to stasis and existential paralysis. On the other hand, skepticism is a proper and useful tool for questioning beliefs and behaviors in order to improve them. Again, skepticism is a good tool but a lousy stance.

Last week, we also spoke about the various ways we gather information—for example, sensory inputs and experience — and then the multiple ways that we corrupt that very information — from prejudices to biases to flawed logic, etc. We spoke about constructing justified true beliefs with no false propositions as the road away from skepticism toward action. And yet despite developing justified true beliefs, there still remains the serious problem of philosophical regress, the idea that one belief requires support from another belief which requires support for another belief ad infinitum with the effect that no knowledge is truly justified.

Otherwise put, regress is the skeptic’s stock-in-trade. What the American Indians labeled the Great Turtle, i.e. the idea that what supports this world is a great turtle. And, you may ask, what supports that turtle? The answer is another turtle. And so on. In short, if you can figure out a solution to regress, you have a solution to the danger of skepticism as a stance.

So, where is the end of regress?

Where does knowledge become so foundational that it needs no further justification and you’re not building epistemological castles in the sand? We answered that for Descartes: it was, “I think therefore I am.” And for the Jews the end of regress was Har Sinai where our synesthetic experience of G-d — all of our information portals (eyes that heard and ears that saw) were infused with G-dliness to the degree that we gained infallible knowledge of His existence.

Descartes is about the verification of cognition as it exists to exert human will into the world in order to use the world. Afterall, we were conjoined by G-d to rule the world (Bereishis 1:28). This is opposed to Being-ness which is not about the exertion of will but rather about the pure experience of aliveness and G-d-connection. Descartes-ian thinking is about correct apprehension of the world in order to create actionable knowledge. My thought is that that you need both types of regress stops: one for relationship and one for cognition.

The mistake that is made is that when one does not have a regress stop point for Being, one will then identify with one’s Will over Being. That is to say, one will prioritize the exertion of effort to fulfill one’s needs rather than the fact of existing itself. As a result, one will circumscribe Being.

For example, if you become a workaholic, you are identifying the source of your existence as work rather than that work is meant to provide you the means of Being. One of the reasons we’re forbidden to do melacha on Shabbos is in order to safeguard Being against over-identification with the Will that we exert upon the world for six days out of seven. In truth, Will is meant to be the moral expression of Being into the world and there is never meant to be a gap between the two. The greater the break between Being and Will the greater the degree of hypocrisy in a person and the less the break the greater degree of authenticity.

The whole point is, that once one discovers an end to the regress issue, one can be confident that the accrual of knowledge through proper process will be accurate enough to act upon and one will not lapse into skepticism, which is a precursor to depression and worse. Though one does not know the future and does not often see, if ever, a causal relationship between action and result, you can be confident that what you did is nevertheless the best one can do.

Sure it’s a dark world out there but whatever justified true belief without false propositions that compels you into action is what is called knowledge. If there’s no action, it’s not called knowledge even if it’s true. As Sun Zchu writes in The Art of War, to know and not to act is not to know.  And this is Jewish epistemology, this acceptance of imperfect knowledge and acting upon it morally despite the darkness and never lapsing into skepticism as a philosophical stance.

As a sociological aside, as a result of this great indeterminacy, people seem more comfortable with autocracy and its certitude than freedom with its constant inconstancy. Which is why movements continually pop up throughout history that attempt to circumscribe human freedom: Marxism, behaviorism, determinism as expressed through evolution and the biomechanical view that we’re just an assembly of chemicals. The open secret is, of course, that we’re not.