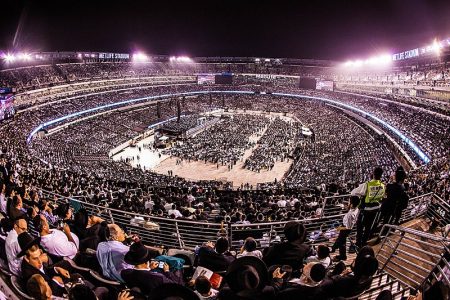 The excitement and anticipation leading up to the recent Siyum HaShas has been matched only by the enormous follow-up coverage that followed it. There were many take-a-ways, including the great kiddush Hashem that took place.  From New Jersey to London, Los Angeles to South Florida, countless testimonials have come in describing the respectful, courteous behavior of the thousands of Jews who attended throughout the world.

“There have been only a handful of events at MetLife Stadium that have so totally moved me emotionally during my tenure since 2001; today definitely qualified. Despite the horrific hate crimes as of late, Jews defied fear and chose to rise above what would have been the natural instinct to postpone–and they did so with a real joy, the likes of which I probably will not see again. While I love my faith and would never look elsewhere, there is a sense of community that these people truly embrace which can’t help but be envied by its counterparts. It was a genuine pleasure to be part of this experience that only occurs every 7 years. In all likelihood I will probably not be employed by the Stadium for the next round; however, it is extremely likely I will be attending as a spectator. Yeah… one for sure, for the Bucket List”.

Becky Syrett, Operations Manager of London’s Wembley Arena, wrote a letter following the Siyum held there that hosted over 7,000 participants. She wrote that the stadium staff was “blown away” that there was “not a single incident” of “drunkenness, boisterous or rowdy behavior,” during the event, which she says in her 28 months of working at the arena at over 300 events, has never happened before with a crowd that size.

She also pointed out that not a single dangerous item was confiscated at the event and that her team was very impressed by the amount of “thank yous” they received at the end of the evening.  She concluded her letter by saying, “I am devastated that Siyum only takes place once every seven years. This event was a delight for all of us.”

Clearly, our people rose to the occasion and put our best feet forward. Our mission is not just to study Torah as an intellectual or academic exercise, but to be molded and shaped into Torah personalities, representing its ideals and living its values. Our rabbis emphasize that the highest level of learning is ללמוד על מנת לעשות, learning for the purpose of practicing.

As much as the study of Torah deserves to be celebrated, the living of Torah, the implementation of Torah values, deserves our greatest celebration.

I only hope and pray we can continue to rise to this level of positive behavior consistently, and not only in association with an event that happens every seven- and-a-half-years.

Personally, there is something else I am thinking about as I take in the vast celebrations of the Siyum. Nearly every single article, post, video or interview about the massive event at MetLife Stadium highlighted the exhilarating experience of being with over 90,000 Jews gathered together in one place and sharing one experience. While people reflected positively about the speeches and program, it was unquestionably the 90,000 people davening, saying Tehillim and dancing together that left the strongest and most indelible impression.

What if instead of the huge gathering at MetLife stadium, ten venues had been chosen that would host 10,000 people each. Certainly, being together with a group that large would be a positive experience, but not nearly as special as being close to one hundred thousand together. By extension, if you have one hundred venues in the tri-state area that had 1,000 attendees per venue, it would be a great display of kavod haTorah, but those who participated would not walk away with the transformational experience of filling a whole massive stadium together.

Just a few days after the Siyum HaShas, 25,000 people marched across the Brooklyn Bridge and held a rally to protest the rise of anti-Semitism. One of the participants commented to me that he was very moved to be part of such a large gathering of people, all moved towards working on the same cause.  What was particularly meaningful, he noted, was seeing how many young people were in attendance and how charged they seemed on this issue.  He shared that he hadn’t felt this way or seen young people engaged in a movement in this way since the Soviet Jewry rallies of many years ago.

Now imagine, instead of 25,000 people marching together, 25 different communities held a gathering with 1,000 people at each gathering.  It would make a statement, but it wouldn’t generate a feeling, a sense of a movement that was achieved by their all being together.

The Siyum doesn’t happen each week and protest rallies don’t occur with regularity, but there is a gathering we hold daily and in an even more highly-attended way on weekends.  It is called davening and it happens at Shul.  When we gather as many people together as possible in one space, it generates an energy, a feeling, and sense of a movement.  And when we divide up and host private minyanim across the community in homes or breakaway settings, while combined it may include the same number of people who davened, the experience cannot be compared, and the impact is totally different.

The pasuk in Mishlei (14:28) describes an axiom of Halacha: B’rov am hadras melech, the larger the gathering, the more glory and honor we give G-d.  With this in mind, the Shulchan Aruch (Orach Chaim 90:9) records that one should always try to daven in Shul.  Indeed, the Gemara (Berachos 8a), recorded by the Shulchan Aruch (90:11), describes that contributing to attendance at Shul and its quality of davening is the very definition of being a good neighbor.

The Noda B’Yehudah (Tzlach drush 23) adds: “Whoever has a Shul available to daven in, but chooses to daven at home, is called a bad neighbor.  Even if there is a quorum of ten people, it still cannot compare to tefillah in Shul.  A Shul is a Mikdash and Hakadosh Baruch Hu resides there… The holiness there is similar to the kedusha of Eretz Yisrael.  The prayers go up to Heaven…When one davens at home, he loses out on all these benefits.”

While not at the magnitude of filling a stadium or populating the whole Brooklyn Bridge, the powerful feeling of being together, connected and energized is available to us regularly, we just have to show up to be part of it.  When we do, not only does it impact us, but it is also noted by those around us.

The pasuk in Parshas Shemos describes:

Pharaoh said to his people, “Behold this people, the Children of Israel are more numerous and stronger than we.

Rav Yisroel, the famed Ruzhiner Tzaddik, points out that when hinei, behold we act as an am Bnei Yisroel, one, unified, united people, then we appear as rav v’atzum, powerful and mighty.  The word am, nation, comes from the word im, together.  We are truly a people when we are interconnected, sharing not only one history, but one destiny, not only one past, and one future, but also being in the present together.

I understand the phenomena of neighborhood minyanim and have even written about the benefits they can offer.  I am not suggesting one minyan, in Shul, all the time.

I am suggesting that you not let your attendance at Shul be as infrequent as the Siyum HaShas.  Your shul and community need you, and you need to join them to tap into the special energy that comes from being together.