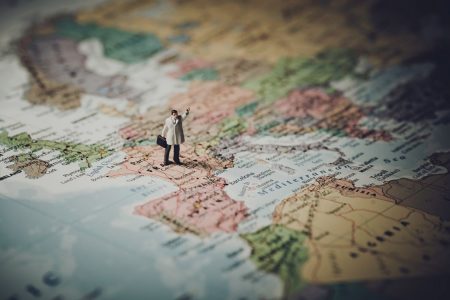 In his 1996 book about death, Herbert Fingarette argued that fearing one’s own demise was irrational. When you die, he wrote, “there is nothing.” Why should we fear the absence of being when we won’t be there ourselves to suffer it?

Twenty years later, facing his own mortality, the philosopher realized that he’d been wrong. Death began to frighten him, and he couldn’t think himself out of it. Fingarette, who for 40 years taught philosophy at the University of California at Santa Barbara, had also written extensively on self-deception. Now, at 97, he wondered whether he’d been deceiving himself about the meaning of life and death.

“It haunts me, the idea of dying soon, whether there’s a good reason or not,” he says in Andrew Hasse’s short documentary ‘Being 97.’ “I walk around often and ask myself, ‘What is the point of it all?’ There must be something I’m missing. I wish I knew.” Atlantic Magazine, January 14, 2020

At some point in time, every person wrestles with the question of whether or not there is a purpose to this world, and whether or not there is some type of afterlife. For professors of philosophy, these questions are especially poignant as they are the focus of their research, teaching and writing. Moreover, especially to Professor Herbert Fingarette, philosophy was not just an academic pursuit; he applied his understand of philosophy to practical life dilemmas.

For example, Fingarette believed in human responsibility. He challenged academics and medical professionals who claimed that alcoholism is a progressive disease that can be dealt with only by abstinence.  The American Medical Association and American Psychiatric Association posit that alcoholism is a disease beyond a drinker’s control. But Fingarette argued that recovering addicts can be responsible for their behavior. In fact, the US Supreme Court relied on Fingarette’s position in their 1988 Traynor v. Turnage decision where the court upheld denying education benefits to veterans who claimed they missed application deadlines because of their addiction as recovering alcoholics.

As Fingarette matured, he re-examined his research on the nature of death questioning the thesis and conclusions of his book, “Death: Philosophical Soundings.” As he entered his 90’s and his own “moment of truth” neared, he conceded that he may have been mistaken about the purpose of life, the nature of death notwithstanding. Ironically, despite his work in self-deception, he admitted that he may have denied what were tenable outlooks on the nature of life and death. He was therefore haunted by what death had in store for himself.

Perhaps Professor Fingarette experienced pangs of teshuva trying to reach a disconnected past. His New York Times obituary noted, “Professor Fingarette was born Herbert Borenstein on January 20, 1921, in Brooklyn to David Borenstein, a manufacturer of sewing machine parts, and Jeannette (Mantel) Borenstein. When his parents divorced and his mother remarried, he took the surname of his stepfather, Harry Fingarette, who owned drugstores and later sold sweaters wholesale.”

If there is one individual in Jewish history who could have benefited from an awareness of self- denial it was Pharaoh, the leader of Egypt who enslaved the Jewish people and refused to acknowledge G-d’s mastery over the universe until he and his nation were decimated by the Ten Plagues. Rabbi Yisroel Miller in The Pharaoh Fantasy explains:

When G-d first sent Moses to Pharaoh, all he asked for was to let Israel out for three days. Moses however, did not say, “Let my people go,” as in the King James Version. He demanded one thing more: “Send out my people;” you, Pharaoh, must yourself send them out; you, too, must agree to do the Will of G-d. Our ancestors could have escaped from Egypt during any one of the Ten Plagues, while Egypt was trapped in its suffering, and G-d could have continued the plague until Israel reached the Promised Land or even forever. But G-d desired more than this, that Pharaoh should also answer Amen; to admit that everyone must accept the Will of the Creator, even Egyptian kings.

To this Pharaoh answered: “Who is G-d that I must listen to His voice?” Pharaoh did not deny G-d’s existence, he could always accept the presence of one more deity. But “that I must listen,” that G-d tells me what to do? That he refused to accept.

The Ten Plagues were more than an awesomely spectacular deliverance of the Jewish nation. They were a public demonstration that, ultimately, even Pharaoh must look upon the truth; even Pharaoh must say: “Go, as you spoke, and bless me also.” In the end, even Pharaoh admitted that he cannot live—no one can live—without the blessing of G-d.

Rabbi Miller concludes that the lesson of Pharaoh is for everyone – to live your life without gaining the clarity of a relationship with G-d is meaningless:

And therefore, whether or not we admit it, the only way to sanity is to strive to do His Will; because the alternative, trying to get along without Him, is a delusion, life in a fantasy world.

Educators seeking to teach about the Jewish perspective on the purpose of this world, death, and The World to Come can refer to the following Olami/NLE Morasha shiurim:

To teach foundations in emunah gained through the slavery and liberation from Egypt see Rabbi Jeremy Kagan’s The Intellect and the Exodus.

Combating Coronavirus with Kavanavirus: Seeing G-d Even During This Crisis
March 24, 2020 - 11:51 am

An Anthology of Rabbinic Perspectives on our Situation