OLAMI Resources   /   Featured Posts   /   The Declaration That No One Can Cancel 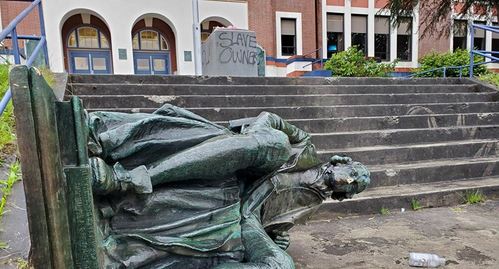 As anti-racial protests resurged in Portland, Seattle and cities nationwide, scores of iconic statues, including those of George Washington and Thomas Jefferson have been torn down. The Washington Post’s Annie Gowen’s July 8 headline declared, As Statues of Founding Fathers Topple, Debate Rages Over Where Protesters Should Draw the Line. Gowen writes,

Manisha Sinha, a Civil War historian at the University of Connecticut and the author of “The Slave’s Cause: A History of Abolition,” said that the removal of the statues should be done after “thoughtful discussion,” rather than by “indiscriminate” action. Sinha said that by targeting Founding Fathers such as Washington and Jefferson, activists risk playing into the conservative narrative that removal of statues is a “slippery slope” toward an erasure of the country’s history.

Is it possible to approach cancel culture with an even keel as Sinha proposes? Highly unlikely. Why? Most people look to justify pre-existing beliefs and behaviors rather than objectively consider and adopt alternative positions. This is documented by numerous studies:

1) The Kahn Academy demonstrated that a smoker, after being presented with conclusive data that their habit is dangerous to their health, will justify or rationalize their smoking. This behavior is termed cognitive dissonance, when there is a disparity between one’s ideas, beliefs, values, behavior, or emotional reactions with contrary external facts. A person’s response to the external challenge can manifest in one of four ways:

Modify – True, smoking two packs a day is suicide. But one pack is already acceptable.

Trivialize – Everyone eventually dies, I might as well enjoy life.

Adding a New Cognition – It’s true that smoking alone is harmful, but if I exercise, I can lengthen my life.

Deny – The smoker denies the doctor’s evidence that continued smoking will cause harm.

2) Professors at Ben-Gurion University, Harvard Business School, and the Interdisciplinary Center Herzliya discovered that people who cheat, or engage in fraud or deception justify their behavior either in advance or subsequent to their improper actions. The researchers concluded,

3) Based on research on the use of mathematical models by the US government to determine energy policy in the aftermath of the Arab oil embargo in the late 1970’s, the White House chose conclusions from conflicting studies that justified policy decisions that they had already made. Rather than ascertain what could be the ideal mix of energy technologies to secure the US from foreign pressures, they selected data from studies that justified politically expedient strategies for the economy, energy supply and the environment. [1]

#BlackLivesMatters triggered a wave of protest that has broadened into challenging any form of authority. To them, the tenets of the Declaration of Independence authored by the Founding Fathers are no longer sacrosanct. There is a sharp polarization between liberal and conservative camps. This discord, however, can be positive. For out of this anger, angst and soul-searching, one can wonder what is the basis of any value; what provides credibility to any position? In this environment, one can rediscover the most basic, essential, and far-reaching principle proclaimed in parshas Va’eschanan, from which everything else of importance flows, “Shema Yisroel, H’ Elokeinu, H’ Echad – Listen, Israel, the Lord is our G-d, the L-rd is One.”

How can one come to that realization? Perhaps the answer lies in the words of the Shema itself. Why does the Shema begin with the word – “Listen?” Just state the declaration, “Israel, the L-rd is our G-d, the L-rd is One.”  What does “Listen” add? Rav Saadiah Gaon teaches that it means to know and internalize that there is only one G-d. Rabbeinu Bachaya explains that the word “Shema” describes the process to recognize His reality:

When a person says something, sometimes he pays attention, and sometimes he doesn’t. Therefore, it says “Listen,” which implies both listening with your ear and also understanding in your heart. In other words, concentrate on the words which describe G-d’s unity when you hear yourself saying them.

Now is a propitious opportunity to reach out and teach those Jews distanced from Judaism to recognize, understand and reaccept the call from Sinai.

Click below for Olami Morasha shiurim addressing the Shema:

[1] The Role of Mathematical Models in the Federal Decision Making Process, University of Pittsburgh, 1979.