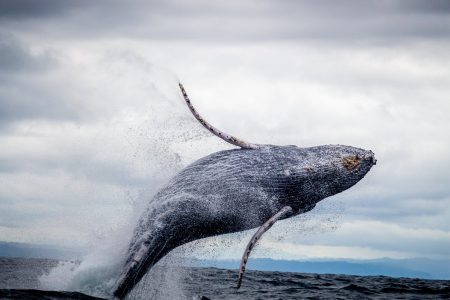 Please see this picture in the New York Times before continuing.

A train that went careening over the end of elevated tracks in the Netherlands on Monday was left teetering about 30 feet above the ground. But no one was injured or killed in the accident — thanks to a sculpture of a whale’s tail that stopped the train from plunging.

“It’s like the scene of a Hollywood movie,” said Ruud Natrop, a spokesman for safety in the Rotterdam-Rijnmond area, where the accident occurred. “Thank G-d the tail was there.” (New York Times, November 2, 2020.)

When Eliezer recounted to Rivka’s father, Bethuel and brother, Lavan the extraordinary series of events that illuminated the hashgacha pratis in Eliezer finding a wife for Yitzchak Avinu, they were forced to acknowledge the Divine providence:

“The matter stemmed from G-d! We are unable to speak to you good or bad.”

Rashi explains what Lavan and Bethuel meant by their cryptic statement, “We are unable to speak to you good or bad:”

“We are unable to rebut you, whether by an insulting retort (such as Rivka is not suitable for Yitzchak) or a reasonable response (such as Rivka is too young to get married now). For it is apparent from your words that “the matter stemmed from G-d!” G-d arranged that Rivka would be there for you.” (ArtScroll Saperstein Rashi incorporating annotations, Bereishis 24:50.)

But the acquiescence was short lived. Lavan and Bethuel were not upstanding individuals. Rashi tells us they were idol worshippers. Lavan is defined as an evil person because he responded to a question from Eliezer before his father did, in his presence. (Years later, when Yaakov Avinu returns to marry Rachel, Lavan notoriously wanted to uproot the Jewish people). Bethuel wanted to prevent Rivka from going with Eliezer and an angel brought about his premature demise. Hence, Lavan saw the high stakes and reluctantly allowed Rivka to leave.

The Torah is sharing an astounding insight into human nature. Within a short time, one can admit to an all-powerful G-d who guides our destiny, and then live in complete denial.

How many times do we hear about, read about, or personally experience hashgacha? The question is: will this awareness make a lasting impact on one’s life?

Locals couldn’t resist coming out to see the strange sight of a train car dangling over the platform edge atop the sea creature’s 32-foot tail… “This is very over the top,” said Joey Bremer, a photographer whose tweeted photos of the dangling train soon went viral.

When he arrived at the scene shortly after the accident — at the end of a train line, in a residential neighborhood — it was quiet, “no panic, absolutely nothing,” he said. But when he returned in the daylight, he said, hundreds of people had gathered.

Mr. Bremer said he was surprised by the attention his pictures had garnered, when he woke up to thousands of retweets and hundreds of messages on Monday.

“I stood there full of disbelief last night,” he said. “I’ve been doing this job for about 10 years, but this is one to remember. You can’t make this up.” (New York Times, Ibid.)