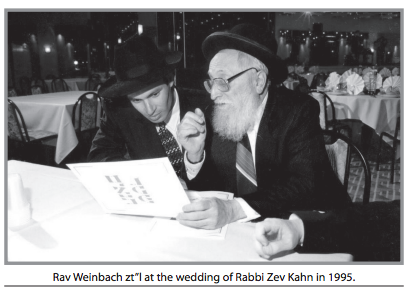 Birshus the Rosh Yeshiva, Rebbetzin Weinbach and mishpacha, Ohr Somayach Rebbeim and talmidim, It is a nechama that I am here today. I knew that Rav Weinbach was not well. But I knew that I was coming to Yerushalayim this week [for the Ohr Somayach JLE Mentor’s Mission]. I was hoping to see him again. Unfortunately, he was niftar last week and I missed the levaya and shiva. It was extremely hard hearing the news so far away from Ohr Somayach and not being able to be consoled and console by being here with you. Since I arrived a few days ago, I have been speaking to people who knew Rav Weinbach, sharing stories. Within the walls of Ohr Somayach, I have been comforted. My earliest memory of Rav Weinbach was hearing him give a schmooze to the whole yeshiva here in the beis medrash over twenty years ago when I was in Rabbi Geffen’s beginner’s program. He spoke very powerfully and I admit I felt a little intimidated by his strongly delivered message. I feel that feeling now standing here, for the very first time, in the same place Rav Weinbach delivered that schmooze, in front of all of you.

One of the most important lessons, Rav Weinbach taught me was in Ohr Lagolah. He taught us about public speaking. He told us two things: Always know who your audience is and what the purpose of your talk is. For example, if you’re speaking at a vort (an engagement party), you are there to express the Simcha everyone feels for the new chasan and kallah to be and to give them a bracha. You’re not there to give a shiur. Secondly, he told us to choose one message and stick to it. Keep it clear and simple. In the dozens and dozens of times I heard Rav Weinbach speak, he was the perfect role model of those two lessons.

I want to share a few experiences of and lessons from Rav Weinbach. I’m speaking as a talmid of Ohr Somayach, on behalf of former talmidim and to all the talmidim of Ohr Somayach especially in chutz l’aretz who still feel a kesher to Ohr Somayach and Rav Weinbach. Not alumni. As Rav Chaim Dov Keller, my son’s Rosh Yeshiva at Telz in Chicago, said: If you’re a true talmid of a yeshiva, you will always be a talmid.

Over the 20years, my relationship with Rav Weinbach changed and grew as I changed and grew. What I thought would be a 6 month stay turned into 6 years. I moved from the beginner’s program to the beis medrash. I got married and did the Ohr Lagolah program, staying an extra year as an assistant to Rabbi Lazerus. I then moved to Chicago to work for the Lakewood Kollel and seven years ago, I started a kiruv organization called JET. Over the last five years, I’ve been bringing students from Chicago on the JLE Mentors Mission.

I was in his bekiyus shiur in the beis medrash program. He was always on time. He gave us weekly bechinas, written out by hand. At that time the OhrNet weekly Torah magazine had just started and Rav Weinbach wrote a number of articles for that too. He obviously had many, many other responsibilities. It is only now, when I have so much to do, that I appreciate more and more the absolute focus and clarity he had to have to do all he did every day.

One time in his office, I don’t remember what I was asking his advice about, he told me: “Al titnadev, v’al tisharev.” Don’t volunteer, but don’t refuse a request. Also, when I was involved in a conflict with someone that required a back and forth communication, he advised me: Try as best you can to avoid putting anything down on paper. Avoid a ‘paper trail’ as he called it. “You never know where it will end up.” Yet two things, he put on paper are my two most powerful memories.

My favorite memory was when I left the Lakewood Kollel after 7 years to start my own kiruv organization. It was the summer of 2005 and I didn’t have a name for it yet. I had an idea I ran by him. He rejected it and explained why. He took out one of his trademark thin yellow strips of paper, thought for a few seconds, then wrote down Jewish Education, paused again, then wrote Workshop. JEW. Then he said, “No, that won’t work. Let’s start the other way.” He wrote down the word JET. It had a certain ring to it he thought would appeal to college students. Again he wrote Jewish Education and paused. I suggest Team (maybe because of my sporting background). He liked it. He gave me a bracha. I still have
that strip of paper somewhere and his bracha, I am certain, is a big reason for our Hatzlacha and growth over the years.

There is very, very little I can say or do to repay all Ohr Somayach and especially Rav Weinbach have done for me. But I could give him nachas. Every time I came on a JLE trip, baruch Hashem, every six months, the last five years or so, I would look forward to sitting in his office and telling him how well JET was doing. His eyes would light up as I told him how many students from Chicago were on the JLE or in the Center. I would always try introduce them to him. One time I brought my two older boys, Yisrael Tzvi and Meir Simcha, on a JLE trip. Both were born here and had their brises in Ohr Somayach. I told him how well they were doing. He had such nachas. That was all I could give back.

He always asked about my family. Shortly after my family moved to Chicago, we were struck with a very serious illness. My wife and I were devastated, confused, afraid. Chicago has a wonderful community and they helped enormously. We went for eytzah, for support. The news spread to Eretz Yisrael and to Ohr Somayach quickly. Tehillim were said around the world.

A few days later, perhaps the next day, I received a fax from Rav Weinbach. In it he quoted a chazal about Avraham Avinu and Akeidas Yitzchak, that Hashem never gives a nisayon to a person that he cannot overcome. He gave my wife and I chizuk that we too could overcome this nisayon. I read that fax many, many times. I still have it, and it helps me now as it helped me then.

When I first heard of his illness, when I would come to talk to him in his office, probably because of my experience, he would discuss his illness and he was dealing with it. That gave me chizuk. The last time I saw Rav Weinbach was six months ago. He looked a little weaker, his beard was thinner. I need encouragement I asked him: “How do you avoid burnout, running a kiruv organization. Kiruv is hard work. How can I carry on?” Who better to ask than Rav Weinbach. He just said. “Just keep on going. One day at a time.”

I used to call Rav Weinbach before Rosh Hashanah to say shalom Aleichem and to wish him and his rebbetzin and mishpacha a good Yom Tov, a healthy, happy year. Because of the time difference between Chicago and Yerushalayim, often it would be close to Yomtov and the Rebbetzin would and I would ask her to relay the message. A week before he was niftar, Yisrael Booth, from Ohr Somayach, called Mitch Rose, a mutual friend in Chicago, and told him the situation was very bad. Mitch told me and the next day I called the house. The Rebbetzin answered and not expecting to speak to Rav Weinbach, I asked her to pass on a message to him. She said, “He is right here. You can speak to him.” I told Rav Weinbach, that I was davening for him, I wished him a refuah shlaimah and that I looked forward to seeing him soon. He said: “Thank you. Keep up the good work. I can’t talk now.”

I won’t hear those words ever again and yet, I’ll hear them every day of my life.