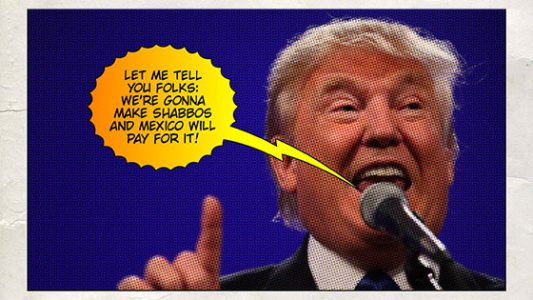 With the Democrats successful crowning of a uniquely disliked political figure, and Mickey Mouse the only other figure in American life that seems to draw consistent unsolicited votes, Donald J. Trump has an actual – if long – shot of winning the White House.

Trump’s primary success has come to the surprise of much of the country, most of all to those who are in the paid position of anticipating and predicting political outcomes.

What was behind the man’s upset victory of the Republican Party’s nomination, and what if anything can we learn from it?

Let me begin with the disclaimer that I’m totally ducking any judgment of the candidate. There have probably been enough articles written on the issue to form a three lane highway from Trump’s NY campaign headquarters to DC and back. Rather, my goal here is to offer key takeaways we can learn from his Republican nomination victory.

Based on heaps of research and our own lifetime of experience, we know how significant of a role emotions play in decision making. We also know that emotions can be as mercurial as they are powerful, immediate as they are irrational.

It’s this ability to keep his finger on the beating pulse of the masses that has allowed him to insert himself into the swirling anxiety and rage about jobs, political ineffectiveness, and loss of American prestige on the world stage. If you’re mad and helpless, he’s got your back.

It goes without saying that to be effective in Jewish outreach and communal work we need to be personable and natural in forming relationships. What’s harder to do is to allow our personal predispositions to change so that we can meet the Jewish people where they are today.

All too many organizations have changed their programming minimally over the past 10 years. Shul events, Israel trips, and youth activities can be virtually indistinguishable from their decade-old counterparts. Yet we know how much has changed for Americans economically, socially, and ideologically in that same period.

There’s an often heard lament that kiruv today doesn’t work as it did in the “good old days.” Can we honestly say that our kiruv approaches have changed since those good old nostalgic times nearly as much as have the times themselves?

This is not a criticism of the thousands of idealistic and tireless professional and lay activists who are the driving engines of our spiritual community. Rather, it’s an opportunity for us to sharpen our focus on how we can more faithfully serve that very community.

If You’re Saying Something Outrageous, Say it with Outrageous Confidence

Donald Trump has said all sorts of things that would sound unhinged if they came from anybody else. He plans to have a sovereign neighbor build him a wall about which many in this country are at best ambivalent. He’s promised 35%-45% tariffs on Chinese imports and withdrawal of the US from all trade agreements. Finally, he’s let us know that he’ll cut taxes to the tune of a $10 trillion reduction in federal tax receipts over the next 10 years. Wild stuff.

He’s been met with wild success.

While only the Lord can possibly know what Mr. Trump actually believes, what he knows is that people will respect you for saying outrageous things if you say them with confidence and conviction. Time and again, Trump supporters can be heard heaping praise on the only candidate in the political field whom they believe “tells it like it is.”

We, as committed Jews, believe many things that sound outrageous to modern Western ears. We believe in an all-encompassing Divine unity. We believe in a personal relationship with this unseen and forever unseeable Being, based on no less than Divine revelation to our entire people. We believe that our personal actions have cosmic importance, and that it’s through our humble lives of consistent commitment that we will bring relief and redemption, through Moshiach, to human history.

We’ve got practice. Since the very first Jew, Jews have always believed things that have sounded outrageous to contemporary ears. This hasn’t held us back from maintaining and championing these beliefs, to the infinite benefit of the human race.

Let’s not waiver. Although the tone and tempo of our social conversation has gotten increasingly more shrill and staccato over recent years, we can still stand with confidence by our “outrageous” beliefs. With confidence we can continue to believe and tell it – like it really is.

The Bush family has been involved in politics since 1964. Jeb Bush, with a brother and father who had served in the Oval Office, was waiting in the wings – ready for his turn.

Ted Cruz and Marco Rubio were both freshman senators who had their sights on the presidency from their first days in the chamber. They spent their terms carefully distinguishing themselves from their peers – as outsiders, the “true” conservative republicans.

Donald Trump showed up and crashed the party, pun intended. The southern candidates who had so carefully groomed their positions, personas, and records, were trounced in an end run by a brash upstart New Yorker.

While there’s much to be said about planning, Trump’s win teaches us an important lesson about ignoring caution and doing. Early birds get worms, not because they are birds, but because they are early. I should add, early and present.

How often do we sit on a great idea for an event, a class series, or a relationship because we’re waiting to get our ducks in line? While Mr. Trump may never have quite had all his ducks in a line, he finds himself at the front of the line.

Considering how singularly unsuccessful seasoned pundits have been at predicting outcomes in this political season, I’m hardly going to try my hand at guessing the end of this story. I am however most certain that regardless of who wins in November, the Jewish story will long outlast their term.

In a political contest marked by new lows of shamelessness, insult, and vulgarity, let us take a moment to ponder takeaways that will hopefully return some measure of dignity to ourselves and the American Jewish search for respectable leadership.

This article is a modified version of my opinion piece published by the Times of Israel on May 9, 2016.

What You Can Do Today

___________
Rabbi Ozzie Burnham is the Managing Director of Oztonish Consulting. He began his work in nonprofit management and marketing with MEOR in 2006 as Director of Special Projects and then Director of Operations. Since that time he has continuously been broadening and refining his expertise in management strategy, marketing methodology and practice, web development and analytics, database architecture and coding, social media management, and multimedia production. If he can help you improve the way you reach and touch lives in your community – both virtually and in person – please email oz@oztonish.com or call 888.623.OZME (888.623.6963).

If this post has been helpful, please share it with your friends. It’s cheaper than schmaltz herring and is calorie free!