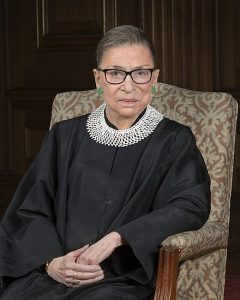 The popular writer Jennifer Weiner describes her own Jewish identity in the context of exploring the Jewishness of former Justice Ruth Bader Ginsberg (R.B.G.) in the NYTimes on September 29, 2020. Weiner sets the tone for the essay, The Very Jewish R.B.G., with a keen observation by her then five-year-old daughter, Phoebe, during a Disney World vacation:

“Almost nine years ago, in early December, I took my younger daughter, Phoebe, to Disney World to celebrate her fifth birthday. If you’ve never been to the happiest place on earth around Christmas, you need to know two things. First: the entire place, from Adventureland to Epcot, is garlanded in Christmas wreaths and Christmas lights, a wonderland of green and red with Mickey and Minnie dressed as Santa and Mrs. Claus.

The other thing you need to know is that Disney personnel refer to any female-presenting young person as ‘princess.’ So there we were, in the Bibbidi Bobbidi Boutique, where parents pay hundreds of dollars for the privilege of getting their kids “princess makeovers,” and Phoebe’s “fairy godmother in training” gave her a manicure and made small talk, asking, ‘Did you make your list for Santa yet, Princess?’

I waited to see how my daughter would respond. I watched her think. Finally, Phoebe said: ‘I do not make a list for Santa. Because I am a Jewish princess.’

I laughed and laughed. Then I explained to her that a Jewish Princess is something else entirely. It was hilarious. But that trip was also her first introduction to a lesson she will learn, over and over, in a thousand ways large and small: that she is different, that she’s the other, and always will be.”

After offering this glimpse into her own Jewish identity, Weiner moves on to R.B.G. She relates that The Guardian had published an obituary about the former Justice claiming she abandoned Judaism and the paper received a backlash of letters asserting otherwise. It turns out the Justice had occasionally attended synagogue, “spoke openly and proudly about her Judaism,” affixed a mezuzah to her chamber’s door, and framed the Torah’s precept, “Justice, justice, shall you pursue” on her office wall. In response, The Guardian modified the article stating that although R.B.G. “moved away from strict religious observance,” she “nevertheless remained deeply committed to her Jewish identity.”

In the aftermath, Weiner, a Princeton graduate, raises a fundamental question about Jewish identity:

Her answer frames how the majority of American Jews in the 20th and 21st centuries define Judaism:

I can’t answer for R.B.G. But, most Jews will tell you that a Jewish identity has little to do with whether you keep kosher or attend services every Friday and everything to do with your culture, your ethnicity; with the way you see the world and the way the world sees you. It is an identity we can’t slip, even if we want to.”

The cultural/ethnic approach to Judaism is the consequence of the development and spread of Reform, Conservative and Reconstructionist movements beginning in the late 1800’s that increasingly distanced Judaism from the observance of Jewish law. This separation weakened Jews’ connection to Judaism and led to disinterest in marrying Jewish. By 2013, the Pew Research Center documented the demographic implosion of non-Orthodox American Jewry over the past fifty years, attributed to markedly reduced Jewish observance.

Most American Jews were not rigorous in analyzing the underpinnings of the different Jewish streams to evaluate which is “correct;” rather since there were rabbis guiding each movement, they regarded each as equally legitimate approaches. Individuals and families chose whichever stream felt most comfortable with their lifestyle and outlook on life. And most stayed away from Orthodoxy thinking it was archaic ritual. In the end, millions of American Jews ended up short-changed without living a meaningful Jewish life, and without Jewish progeny embracing a rich 3,000 year Jewish heritage. [1]

Beginning in the late 60’s, while a multitude of non-Orthodox Jews began assimilating, a separate trend arose worldwide among thousands of non-Orthodox Jews looking for more meaning in their life, who decided to embrace Orthodox Judaism. Known as “baalei teshuva” many were highly successful professionals educated in the finest universities. Why the switch?  They were searching for an authentic connection to meaning, such as articulated in Rabbi Jeremy Kagan’s The Choice to Be, Rabbi Akiva Tatz MD’s Worldmask, Rabbi Dr. Dovid Gottlieb’s Reason to Believe, Rabbi Jonathan Sacks’ To Heal a Fractured World, and Rabbi Abraham Twerski’s Let Us Make Man. Baalei teshuva integrated into vibrant growing Orthodox Jewish communities throughout the world.

Ms. Weiner herself mentions a core insight into Jewish distinctiveness in her initial description of her daughter’s (and her own) Judaism identity: “she is different, that she’s the other, and always will be.” Jews are a nation who followed the lead of the progenitor, Avraham – who is called the “Ivri,” literally “(from) the other side” – the person who comes from the “other side of the river.” The Medresh teaches that the “other side of the river” has a deeper meaning – it reflects Avraham’s solitary opposition to the world’s paganism. The connotation of being an Ivri therefore, is the Jewish value to stand up for Jewish principles even if we are alone in our moral convictions. But what exactly characterizes that “otherness?”

Avraham introduced humanity to the concept of chesed – leading a life of genuine caring and altruism. The principle is expressed by the Mishnah as one of the three foundations of Jewish life: Torah study, avodah (mitzvah observance), and chesed. Rabbi Yitzchak Berkovits explains that ultimately, Avraham embodied chesed to bring awareness to the existence of G-d: just as mankind cannot exist without the goodness and kindness of others, humanity relies on the chesed of G-d by creating, sustaining and guiding the world. The medresh relates that Avraham taught Jewish principles to the men, and his wife Sarah, to the women.

Within several generations, Avraham and Sarah’s descendants followed the path they blazed, and blossomed into a nation of three million. G-d forged an eternal covenant with the Jewish nation based on Torah observance at an unparalleled national revelation at Mt. Sinai, recognized by the majority of non-Jewish nations and religions. The essence of Torah is mitzvot or commandments by which each person, with an eternal soul, connects and builds a personal relationship with G-d, strives to refine their character and interpersonal relationships, and ultimately the world – tikkun olam.

“The notion of tikkun olam, that the world is broken and that each of us has a role in its repair, is a value that would lead someone to a life like hers. It is a value that overlaps with the highest American ideals.”

The key however, is that tikkun olam cannot be achieved without the observance of mitzvot. In the words of Rabbi Joseph B. Soloveitchik, “The Halachah (Jewish law), which was given to us from Sinai, is the objectification of religion in clear and determined forms, in precise and authoritative laws, and in definite principles. It translates subjectivity into objectivity, the amorphous flow of religious experience into a fixed pattern of lawfulness.”

While I applaud Ms. Weiner for her heartfelt Jewish commitment, as well as her ability to share those values with her daughter, their lives can be transformed by learning about and incorporating mitzvah observance.

When I was in university in the late seventies, there were placards posted throughout Jewish communities, “Free Soviet Jewry.” One of the most publicized cases was Anatoly (Natan) Sharansky, a brilliant mathematician who applied to make Aliya in 1973 and was arrested in March 1977 on false charges of treason and spying for the US. He had married Natalia (Avital) Stieglitz on July 4, 1974, who had only 36 hours remaining to use an exit visa. She left for Israel July 5th, expecting her husband to follow within a few months, but in the end they were reunited only after nearly twelve years following nine years of Anatoly’s incarceration in harsh Siberian prisons.

It was through Avital Sharansky’s tireless efforts mobilizing the Jewish community and meeting with world leaders such as Presidents Ronald Reagan and François Mitterand, that Anatoly was finally released on February 11, 1986 under direct orders from Soviet Premier Mikhail Gorbachev. During their separation, Avital became religious and although otherwise extremely shy, in the words of Anatoly (Tablet Magazine June 30, 2016), “She felt very strongly that she not only was fighting for her husband but she was doing something very important to make sure that Tachnit Alokit, the Divine design, will be implemented in the world.”

Natan Sharansky flew to Israel immediately after his release to be reunited with his wife and actualize his deep aspiration to immigrate. After a hero’s welcome at Ben Gurion airport, he was driven directly to the Kotel, the Western Wall in Jerusalem, where hundreds of well-wishers hurried to greet him. I will never forget his ear-to ear smile as he drove past me on the Kotel plaza.

During the 1994-1995 academic year, my family spent nearly every other Shabbat at Brandeis University where we usually stayed in a suite in guest housing for professors. One Shabbat, we arrived and were given the key to just a “regular” guest room. We wondered, “What guests would be spending Shabbat in the suite?” I had already left for the campus synagogue for the Friday night Shabbat services when my wife answered a knock at the door. There stood Avital Sharansky asking if she and her husband could borrow a Kiddush cup, if we had one.

Today, my family recounts that story, among others, to illustrate that in the end, it’s all about the mitzvah connections we strive to accomplish to continue the legacy of the Jewish people.