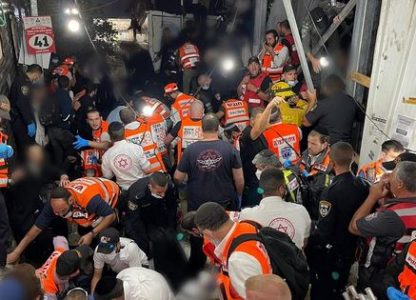 Any tragedy that happens to the Jewish people – or to the world in general – requires us to pause, check ourselves and do Teshuva on everything that needs it. The tragedy that just happened in Meron is no different. But there was surely something deeper going on.

The period between Pesach and Shavuos was originally meant to be a happy time. We became a nation at Pesach and we marched in seven short weeks to get the Torah, the purpose of that nationhood. The death of the students of Rebbe Akiva introduced an element of semi-mourning. An entire generation of scholars – 24,000, were wiped out – their Torah gone forever. For those who keep the first part, this ends with the joy of Lag B’Omer. Their Torah may be gone, but the light of the Zohar shone into the world through another student of Rebbe Akiva, Rabbi Shimon bar Yochai.

The tragedy this Thursday night happened on Lag B’Omer, at the grave of Rebbe Shimon Bar Yochai. It is a tragic mystery made more so by the contradiction of what this time in that place means. We cannot fathom the reasons, because such things come from the hester Panim of Hakadosh Boruch Hu. Perforce, they are hidden. Perforce, they represent that part of our relationship with G-d where I realize that I cannot reduce G-d’s thoughts to the level of mine. And I am relieved that G-d is so much bigger, deeper, more profound …. than that.

In the Daas Tevunos, the Ramchal states that at the end of time, G-d will need to speed up history at the end of days to make sure that everything is completed in time for Moshiach. History, said the Chofetz Chaim, will go faster and faster. In order to do this, G-d will activate a special hanhaga through which He will run the world. Let’s call this the “fast-track hanhaga.” Part of this is for G-d to use the suffering of Tzadikim to create the final Tikunim (lit. fixings) that we need in order to ensure the general Tikun – the Tikun Haklali – that is needed for Bias Ha’Mashiach.

The Holocaust, says Rav Chaim Friedlander, was just such an event. The Kedoshim who suffered and died produced a staggering amount of Kedusha, that ripple effects of which were felt in the unprecedented wave of Torah learning (when we would have expected the opposite to have taken place), the baal-teshuva movement, and more. (Nesivos Shalom).

The event of Lag B’Omer – in its timing, in its place, in the way it unfolded, and the people to whom it happened – all have the signs of just such an event. We must feel the tragedy and our tears must flow. And, simultaneously, we must feel the unleashing of the powerful Kedusha that the death of these Kedoshim – and the suffering of those injured – unleashed.

Rabbi Avraham Edelstein is the Education Director of Neve Yerushalayim College for Women and a senior advisor to Olami. Many of Rabbi Edelstein’s foundational publications addressing the world of Kiruv appear on OlamiResources.com: Series on Kiruv and Chinuch, Commentary on Chumash and Yom Tovim, The Laws of Outreach, as well as contributing articles. Rabbi Edelstein has just published The Human Challenge available from Mosaica Press.