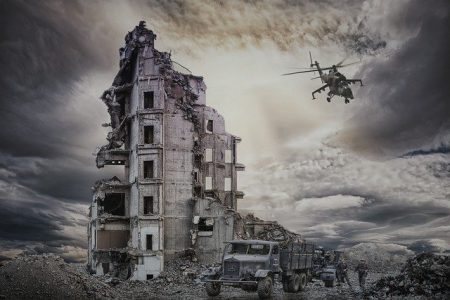 It is an unfortunate truism of modern life, especially in the last few years, that virtually all over the world terrorism is a major component of every war. Conventional wars used to be fought on a battlefield between armies in uniform (often in an officially designated area), but that kind of warfare is virtually a thing of the past. Each time a passenger enters an airport and goes through its elaborate security checks, it is an acknowledgement that the threat of terrorism is a part of life. Therefore, when actual combat fighting involves terrorists, the circumstances, facts and conditions of war have drastically changed. The battleground is now often in civilian neighborhoods, and the goals of each battle and war are also different than before. One “new” aspect of such warfare is the element of collateral damage – i.e., the unavoidable deaths of civilians in the midst of battle. This chapter will discuss what Judaism has to say about such a situation and how to resolve the inherent dilemma of fighting terrorists who are located within civilian populations.

In order to make the dilemma more real and practical, let us describe a scenario based on actual circumstances faced by soldiers past and present. The same dilemma exists today in different contexts in various wars involving countries all over the world, but the most well-known and most frequent examples involve Palestinian terrorists who intentionally hide and live among the Palestinian civilian populations. Thus, regarding a known terrorist who has killed many Israelis in the past, Israelis intelligence has confirmed that he plans to blow up a bus of Israeli civilians within the next 24 hours. The man is hiding in Gaza City, in an apartment known to the Israeli army, but located in a building with ten other apartments that are filled with innocent women and children. The Israeli army is cognizant of exactly where he is hiding. However, in order eliminate the imminent terrorist threat he presents (since he will almost certainly kill many Israelis the next day), the army will necessarily have to kill between ten to fifteen women and children. Should they take the lives of these innocent people in Gaza in order to assassinate the terrorist and destroy the threat to the civilian Israeli population? (This essay is not intended as a political discussion; rather, it is designed to illustrate the Jewish view regarding this moral dilemma. If some readers have a visceral reaction regarding the killing of civilian Arabs, they may substitute the families of multinational forces and observers, foreigners living in the apartment house, rather than Palestinian Arabs.)

If killing fifteen civilians is indeed justified in order to eradicate this terrorist threat, then what if the situation required killing fifty people in that apartment complex? What if it might cost one hundred lives? If killing fifteen civilians, however, is considered immoral and does not justify killing the terrorist, then would killing five innocents be considered moral? One? Can innocent residents legitimately be “sacrificed” in order to slay a terrorist and prevent him from killing civilians? Are there reasons to allow this collateral damage? What are the reasons to allow the terrorist to live (so that Israeli soldiers will not kill innocent people in Gaza) even though that terrorist will almost certainly kill innocent people in the future?

Once the hiding place of the terrorist from Gaza is clearly identified (the specific apartment in the housing complex), the General Chief of Staff of the army or the Prime Minister can give the final approval to kill this terrorist any time they deem it warranted. They may decide to use a missile from a ship offshore, a drone (unmanned plane) or helicopter (at no risk to Israeli lives) that will fire on that apartment house and kill the terrorist, thereby abolishing the threat from the bomb explosion scheduled for the next day on a bus in Jerusalem. However, there is often great hesitation in killing this man who has murdered many innocent Israelis in the past and will shortly kill again, because innocent people in that apartment house will have to die in the process.  Why the hesitation? If the terrorist is not killed now, more lives will be lost the next day. Does the larger number of lives lost potentially the next day make killing the civilians now in the apartment justified? Does it matter that these innocents to be killed along with the terrorist are not Jewish, while the innocents who would be killed in the bus the next day would be Jewish? If the Israeli army knowingly risks the lives of civilians in order to kill the terrorist and eliminate the threat, is that any different from all terrorists whose purpose is to intentionally kill innocent people?

Since this is such a new phenomenon in modern warfare, are there traditional Jewish sources that discuss this issue at all? Is there a normative Jewish view about how to resolve this painful dilemma where innocent people necessarily will have to die one way or the other? Is the idea of fighting a terrorist enemy equivalent to fighting a conventional war? Amazingly, Jewish tradition has discussed this issue long before the concept of “terrorist” and the expression “collateral damage” was even invented.