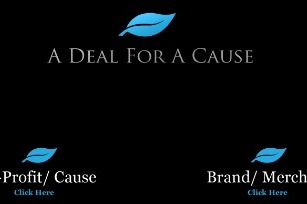 When it comes to an investment or fundraising idea, it’s always important to get in on the ground level before an innovative idea, becomes something that people will simply say, “everyone does it nowadays.” Indeed, Marian Davis’ BBQ Sauce which also helps support The Seattle Kollel was a great original concept that gave the non-profit Kollel positive PR in the press, helped forge a bond between Rabbi and layperson away from a class or Shabbat table (which is always important) and brought in additional funds from consumers who would buy the sauce even out of state!

Finding a unique way to create positive PR, let alone identify a new fundraising initiative that speaks to the digital consumers of our times is ever increasingly difficult. Likewise, the Jewish world is seemingly oversaturated with Raffles and Chinese Auctions. How can one look for something new to bring in additional donors, let alone funds, to their upstart or established non-profit organization?

Enter A Deal for a Cause.

Capitalizing on the popular Groupon.com concept (for more see here), A Deal for a Cause works in a very participative format with your non-profit organization to match your donor base to one of their many merchants and then develops custom daily deal(s) to fit. In today’s recession tens of millions of people worldwide purchase daily deals on sites such as Groupon.com and LivingSocial.com. In fact there’s well over 20 sites like this alone in Israel! A Deal for a Cause expects non-profits to jump on the trend with an emphasis on this being an effective way for someone to purchase an item for a good deal (although understandably sometimes one will purchase items on these sites impulsively) while also knowing that they are giving Tzedakah as well as showing loyalty to the Shul, Kollel or Kiruv Center at the same time.

Most impressive, non-profits can sign up a) for FREE and b) A Deal for a Cause says it gives 50% of the gross revenue back to the charity. This is an improvement over the comparably 3%-7% that the group buying sites typically offer.

Arguably best of all, is that from the Email Flyer all the way to the delivery of the Voucher, A Deal for a Cause manages this campaign and also supplies a 24 hour customer service team. All that you have to do is hit SEND on your email database! ALL AT NO COST (and no real investment of daily time on your part/the part of your team) TO YOU!

The big question is if this model—sending out daily deals via non-profit mailing lists—is actually a good one. Some people already suffer from charity fatigue and a deluge of emails asking them for things. These deals could just be one more thing to be deleted.

On the other hand, this site can be a welcome break and a way that anyone can support your cause and give a personal thank-you in a non-judgmental way. At the end of the day, it very well may work for some of your donor basis and can really take off. Conversely for other organizations, due to age, demographics, and so on and so forth one will find that people will not respond to this cause and will only make a pledge to your organization once a year or to the annual auction.

All in all, this site will allow you to offer people a unique opportunity to help support your cause then simply the tradition charity box or an annual banquet. Moreover, as this isn’t something that is “religious” in nature your students/congregants can (even be encouraged by you to) forward it via email to friends or family as well as share it on Facebook or Twitter! This alone is worthwhile as it will give your organization additional exposure on Social Media sites. After all, in January 2011 alone 1 in every 5 pages viewed online was a Facebook page!