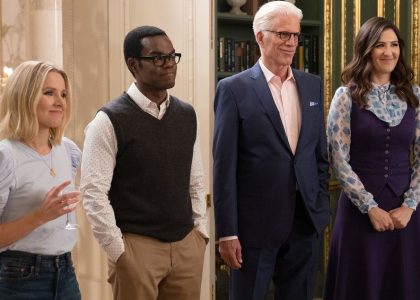 After four seasons, the NBC hit sitcom “The Good Place,” a Hollywood version of the afterlife, aired its finale last month, receiving a rare 100% rating by the revered Rotten Tomatoes. Not to mention a 97% liking rating on Google and 4.9 out of 5 on Netflix. National Public Radio endorsed the series as it entered its fourth season as follows:

And after its finale on January 30, the NPR reviewer proclaimed, “There was so much in this series to admire… ultimately very profound 52 episodes those were.”

The sitcom is described by Spencer Kornhaber in “The Good Place Felt Bad in the End,”

in The Atlantic’s current edition:

In 2017, the show began with its four main characters already dead, navigating a zany afterlife filled with frozen yogurt and lava monsters. Over four seasons, they discovered a glitch in the cosmos that had been sending all humans to hell for the past 500 years. By the finale, the heroes had reopened the gates to heaven, where they were able to sip on stardust and hang with loved ones for as long as they liked.

The popularity of The Good Place reflects the keen interest of the millions of viewers in the meaning and purpose of life and death, albeit in a comic context. In fact, the show’s team, led by Harvard educated Michael Schur, researched the nature of the afterlife from multiple religions (especially Christianity and Eastern traditions), and philosophers (Albert Camus, Jean-Paul Sartre, and T. M. Scanlon).

The final episode delivered a surprise, however, when The Good Place cast viewed the monotony of heaven as not worth continuing and they ended their existence one by one. (Of course, we might wonder how can someone already “dead” commit suicide.) Although not dulling the overall rave reviews, this ending was cause for alarm for Kornhaber. He writes about one of the character’s decision to terminate his “life” as “the moment in paradise when he felt full and final contentment settling in, when it became clear there was nothing more to seek.”

The finale led Kornhaber to conclude that the show’s depiction of the afterlife is as much a pessimistic commentary on living in the here and now:

The show tackled the toughest questions of existence, but its enlightenment resembled something darker… The finale spanned eons in which the characters had every desire met… Eventually, at the end of all wanting, they still wanted one more thing: to not exist. The Good Place ended up, for all its endless wonders, emphasizing consciousness as a shlep. Its heaven replicated the way life can feel like a jog through milestones and sensations, but not the way that life allows for surprise, evolution, and contentment with the present. Saying goodbye was so hard not simply because it was goodbye, but because those departing appeared to have moved past their own preciousness, and the preciousness of those around them.

Moving on after The Good Place, one wonders then, what is in store for us in the next world. Is there an afterlife? If so, will it become so monotonous that one wants out? And if that is what eternity offers, then what’s the point of life itself?! This confusion enables Jewish educators to seize a window of opportunity to present the Jewish view of The Good Place, – how both This World and Olam Haba – The Next World are not only precious, but extraordinary beyond description. Judaism’s clarity on the purpose of this world empowers us to strive to perfect ourselves to earn an eternal Olam Haba – achieving incomprehensible spiritual elevation and awareness from our Source.

As the Ramchal writes in the first chapter of Messilas Yesharim:

Our Sages of blessed memory have instructed us that man was created for the sole purpose of reveling in the Eternal and delighting in the splendor of the Divine Presence, this being the ultimate joy and greatest of all pleasures in existence. The true place for this pleasure is in the World to Come, which was created solely for this purpose.

However, the path that helps us reach our desired goal is this world. That is what our Sages meant when they said that “This world is like an antechamber to the World to Come” (Avot 4:21). The means that lead to this goal are the mitzvot that G-d commanded us to observe, and the place for doing the mitzvot is in this world alone. Therefore, man was first placed in this world to use the methods available to him in order to reach his intended destination, the World to Come. There he will enjoy the good which he acquired by virtue of these means. That is what our Sages of blessed memory meant when they said (Talmud Bavli, Eruvin 22a), “Today to do, and tomorrow, in the World to Come, to receive the reward.”

Educators seeking to teach the Jewish perspective on the purpose of this world and The World to Come can refer to the following Olami Morasha shiurim: