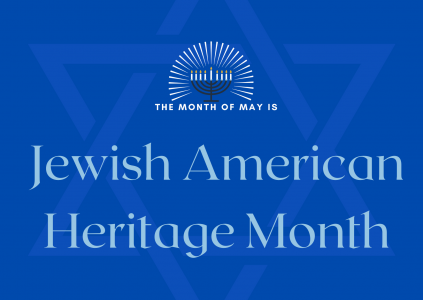 May is #JewishAmericanHeritageMonth. Jewish Americans have contributed in countless ways to our country and to the Department. This month celebrates their heritage and achievements and reaffirms the U.S. is committed to a world free of anti-Semitism.

In the context of the Jewish people’s persecution and exile from host countries throughout world history, such a tweet by the US government is remarkable.

May was proclaimed Jewish American Heritage Month by President George W. Bush in 2006, recognizing the more than 350-year history of Jewish contributions to America and the American culture. The resolution was passed unanimously in the United States House of Representatives and in the United States Senate.

In the centuries since the founding of our nation, Jewish Americans have enriched our country’s culture and character. As #JewishAmericanHeritageMonth commences, we reaffirm our support for the Jewish community and our unwavering commitment to ridding the world of anti-Semitism. pic.twitter.com/H7PTac0SQx

At the founding of America in 1776, there were approximately 2000 Jews who participated in the struggle for independence. By the year 1900 there were 1.5 million American Jews; and by 2019 the Jewish population was estimated at approximately 7 million, 50% of the world’s Jews.  (Wikipedia)

How can we as rabbis and educators utilize this month to enhance our congregants’ and students’ appreciation of the tremendous chesed of H’ to instill such grace in the world’s most powerful nation and provide the religious freedom to enable us to lead full Jewish lives? Clearly one propitious opportunity, especially when so many Americans are coronavirus quarantined, is to offer your regular students an inspiring Zoom series to deepen their knowledge of Judaism and Jewish life. Secondly, this is also a time when many unaffiliated Jews are searching for meaning in light of the great medical, economic and social upheaval, and would jump at the opportunity to join a compelling Zoom series exploring Judaism’s take on the purpose of life.

Please click on the suggested Olami Morasha Syllabus modules below to help launch your #JewishAmericanHeritageMonth programming: