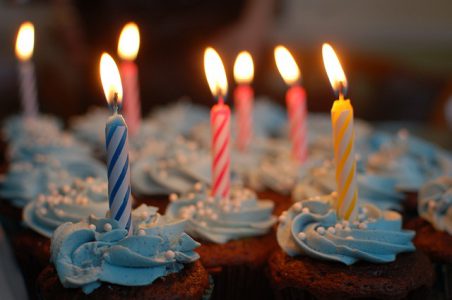 Jews of diverse backgrounds, denominations and levels of observance seem to all observe yahrzeits of their loved ones based on the Hebrew calendar, not the Gregorian one. And yet, when it comes to birthdays and anniversaries, it seems few Jews—even observant ones—know, let alone commemorate, the Hebrew date of these significant milestones in their lives. One explanation is that a yahrzeit comes with observances and rituals like lighting a candle and saying Kaddish. However, the principle is the same. It is the Jewish calendar that should inform our time consciousness and awareness and on which our major milestones and observances should be kept.

Jewish time is not linear with the past behind us, the present happening now, and the future off ahead. Rather, Jewish time is cyclical. We believe that points in time have energy and character and while time is not a loop in which we meet ourselves from last year, it is a spiral in which we advance but along the same recurring cycle. Rosh Hashanah contains the energy of new beginnings, Pesach carries the possibility of liberty and freedom, and Chanukah is the time of miracles. When we observe these holidays, we aren’t simply commemorating an event of the past, but rather the historical event revealed for us the special quality of those days that we seek to tap into now, bayamim ha’heim, u’bizman ha’zeh, in those days and at this time.

What is true for our national holidays is equally important for our personal and individual milestones. Our birthday is a time to reconnect with our having been created and what we uniquely can contribute to the world. Our anniversary is a day to reflect on our rebirth in union with another and what we as a couple can achieve together. While the Gregorian days corresponding with those events are lovely to acknowledge, it is only the Hebrew date that inherently has meaning for us as we revisit those energies year after year.

Sadly, many if not most observant Jews are unfamiliar with these significant dates. Indeed, many can’t even name all of the months of the Hebrew calendar. I am not suggesting that this is the greatest challenge facing the Jewish people and our most urgent problem at this time. However, conceding our time consciousness to the Gregorian calendar and abandoning our own is an expression of how assimilation even effects the committed, observant Jewish community and it is something relatively easy to repair.

When we study the exodus, we are reminded that the Jewish people merited redemption because they never gave up their identity. The Midrash tells us that they maintained Hebrew names, language (they only spoke Hebrew among themselves), and distinctive clothing.  In a time of great assimilation and in a society and world that welcomes us to integrate fully with open arms, we would do well to reinforce our distinct identities within a foreign culture by promoting use of the Hebrew calendar and staying mindful each day of the Hebrew date.

The very first mitzvah we received was HaChodesh hazeh lachem, the gift of controlling time by sanctifying the new moon. The Ramban understands that the commandment is not simply to observe Rosh Chodesh, but to count according to the Jewish calendar. Indeed, the Chasam Sofer wrote, “Those who begin their letters with the year of the birth of the Christian messiah, are writing and signing away their portion in the World to Come.” According to the Chasam Sofer, there is a prohibition against using secular dates, including days of the week, the months of the year, and the year itself.

We follow the opinion that there is no prohibition to use the secular date, but nevertheless, there certainly is a great preference to date our documents using the Jewish date. Rabbi Ovadia Yosef summed it up well when he wrote, “It is therefore clear that there is no prohibition whatsoever in using the secular date. Nonetheless, there remains a virtue of using the Jewish date, and whenever there is no great need, the months and years should be written according to the dating of Israel—and particularly in our holy land. When there is a need to write the secular date, it is good to also make mention of the count of years from Creation.”

As Jews, it is the Hebrew calendar that best captures our most auspicious moments. Marking these events on a uniquely Jewish calendar will undoubtedly strengthen the Jewish people and help us maintain an identity and lifestyle that will please God merit the redemption yet again.

To find your Hebrew birthday or anniversary, go here.